The Midway Plaisance, known locally as the Midway, is a Chicago public park on the South Side of Chicago, Illinois. It is one mile long by 220 yards wide and extends along 59th and 60th streets, joining Washington Park at its west end and Jackson Park at its east end. It divides the Hyde Park community area to the north from the Woodlawn community area to the south, 6 miles (10 km) south of the downtown "Loop", near Lake Michigan. Today, the Midway runs through the southern portion of the University of Chicago campus, with university and related buildings fronting it on both sides.

It early came to prominence when it hosted amusements at the World's Columbian Exposition in 1893, lending the name "Midway" to areas at county and state fairs with sideshows. Laid out with long vistas and avenues of trees at the start of the 20th century, the Midway in part followed the vision of Frederick Law Olmsted, one of the creators of New York City's famous Central Park, but without his design of creating a Venetian canal linking the lagoon systems of Jackson and Washington parks. Instead, the Midway is landscaped with a fosse or dry ditch where the canal would have been.

Later designers and artists added (or sought to add) their vision to the Midway. A pet project of the University of Chicago and almost a part of its campus, it has remained essentially a green area. 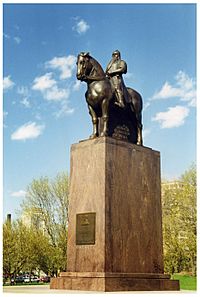 The word "plaisance" is both the French spelling of and a quaint obsolete spelling for "pleasance", itself an obscure word in this context meaning "a pleasure ground laid out with shady walks, trees and shrubs, statuary, and ornamental water". 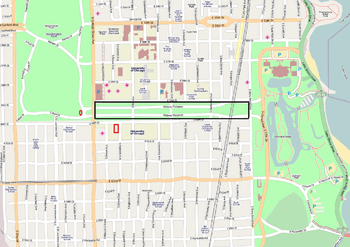 Maps showing the Midway Plaisance (black rectangle) between Washington Park to the west (left) and Jackson Park. (Chicago Park District is in green, University of Chicago in yellow background)

The Midway Plaisance began as a vision in the 1850s of Paul Cornell, a land developer, to turn an undeveloped stretch of infertile land south of Chicago into an urban lakeside retreat for middle- and upper-class residents seeking to escape city life. The area was a lakefront marsh ecosystem.

In 1869, Cornell and his South Park Commission were granted the right to set up a complex of parks and boulevards that would include Washington Park to the west, Jackson Park to the east on the lakeshore, and the Midway Plaisance as a system of paths and waterways connecting the two (see Encyclopedia of Chicago Map). The firm of Olmsted, Vaux, and Co., famous for creating New York City's Central Park, was hired to design the urban oasis. Part of their plan was that the Midway would function as "a magnificent chain of lakes", allowing boaters to go from the ponds to be built in Washington Park to the lagoons to be developed in Jackson Park and through the lagoons to Lake Michigan.

The South Park Commission office, where all the detailed plans were stored, was burned in the Great Chicago Fire of 1871. The expense of rebuilding the city eliminated the funds to cover expenditures that the plans would have entailed, and the South Park area remained largely in its natural swampy state.

The World's Columbian Exposition of 1893 was held in the underdeveloped parts of the South Park. The worldwide celebration of Columbus' transfer of "the torch of civilization to the New World" in 1492 was one of the most successful and influential of world's fairs. It covered over 600 acres (2.4 km²) and attracted exhibitors and visitors from all over the world.

For the Exposition, the mile-long Midway Plaisance, running from the eastern edge of Washington Park on Cottage Grove Avenue to the western edge of Jackson Park on Stony Island Avenue, was turned over to the theatrical entrepreneur Sol Bloom, a protégé of Chicago mayor Carter Harrison, Sr. It became a grand mix of fakes, hokum, and the genuinely educational and introduced the "hootchy-cootchy" version of the belly dance in the "Street in Cairo" amusement; it was the most popular, with 2.25 million admissions. George Washington Gale Ferris Jr.'s original Ferris Wheel carried over 1.5 million passengers. The Midway's money-making concessions and sideshows made over $4 million in 1893 dollars, and it was the more memorable portion of the Exposition for many visitors. The Midway also featured more scholarly exhibits which were overseen by Ward Putman, head of Harvard University’s Peabody Museum of Archaeology and Ethnology, and ethnologist Otis Tufton Mason of the Smithsonian Institution.

In the years after the Exposition closed, "midway" came to be used in the United States to signify the area for amusements at a county or state fair, circus, or amusement park. 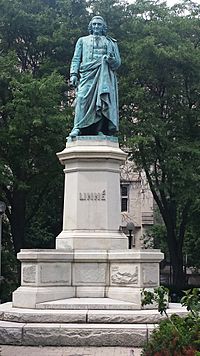 Following the Exposition, the Midway Plaisance was returned to a park setting, under the renewed plans of Frederick Law Olmsted. Over the ensuing decades, the Midway gradually came to be a part of the University of Chicago, which expanded in 1926 to be located on either side of it. Today the Midway sits between the main campus to the north and the professional graduate schools the University of Chicago Law School, the Harris School of Public Policy, the School of Social Service Administration, and the Graham School of Continuing Liberal and Professional Studies to the south.

Later designers and artists, including Lorado Taft, and Eero Saarinen added or sought to add their vision to the Midway. A statue of the father of modern taxonomy, Carl Linnaeus, and an equestrian statue by sculptor Albin Polasek of the Knight of Blanik, a legendary Czech savior who emerges from Blaník mountain in his nation's hour of need, grace the Midway.

It has remained essentially a green area, a public resource subject to much speculation, and various periodic plans of redevelopment. The sunken panels, home now to soccer players and a new ice skating and sports facility, the cross-street "bridges", and the east–west lines of trees, pay homage to Olmsted's vision.

In 1999, a new master plan for the Midway Plaisance done by OLIN, a landscape architecture firm, was unveiled by the University of Chicago and the Chicago Park District.

The proximity of the Midway to the University gave the school's early football teams, the Maroons, a second nickname, "Monsters of the Midway", a name later applied to the Chicago Bears when the University of Chicago dropped its football program. The program has since been reinstated, and the Maroons play at Stagg Field on 55th street, half a mile north of the midway.

All content from Kiddle encyclopedia articles (including the article images and facts) can be freely used under Attribution-ShareAlike license, unless stated otherwise. Cite this article:
Midway Plaisance Facts for Kids. Kiddle Encyclopedia.