Located in the Magic Valley of south central Idaho in Jerome County, the site is in the Snake River Plain, a remote high desert area north of the Snake River. It is 17 miles (27 km) northeast of Twin Falls and just north of Eden, in an area known as Hunt. The site is administered by the National Park Service of the U.S. Department of the Interior, and was originally established as the Minidoka Internment National Monument in 2001. Its elevation is just under 4,000 feet (1,220 m) above sea level.

The Minidoka War Relocation Center operated from 1942 to 1945 as one of ten camps at which Japanese Americans, both citizens and resident "aliens", were interned during World War II. Under provisions of President Franklin D. Roosevelt's Executive Order 9066, all persons of Japanese ancestry were excluded from the West Coast of the United States. At its peak, Minidoka housed 9,397 Japanese Americans, predominantly from Oregon, Washington, and Alaska.

The Minidoka irrigation project shares its name with Minidoka County. The Minidoka name was applied to the Idaho relocation center in Jerome County, probably to avoid confusion with the Jerome War Relocation Center in Jerome, Arkansas. Construction by the Morrison-Knudsen Company began in 1942 on the camp, which received 10,000 internees by years' end. Many of the internees worked as farm labor, and later on the irrigation project and the construction of Anderson Ranch Dam, northeast of Mountain Home. The Reclamation Act of 1902 had racial exclusions on labor which were strictly adhered to until Congress changed the law in 1943. Population at the Minidoka camp declined to 8,500 at the end of 1943, and to 6,950 by the end of 1944. The camp formally closed on October 28, 1945. On February 10, 1946, the vacated camp was turned over to the U.S. Bureau of Reclamation, which used the facilities to house returning war veterans.

In June 1942, the War Department authorized the formation of the 100th Infantry Battalion consisting of 1,432 men of Japanese descent in the Hawaii National Guard and sent them to Camps McCoy and Shelby for advanced training. Because of its superior training record, FDR authorized the formation of the 442nd RCT in January 1943 when 10,000 men from Hawaii signed up with eventually 2,686 being chosen along with 1,500 from the mainland. The Minidoka Internees created an Honor Roll display to acknowledge the service of their fellow Japanese-Americans. According to Echoes of Silence, 844 men from this camp volunteered or were drafted for military service. Although the original was lost after the war, the Honor Roll was recreated by the Friends of Minidoka group in 2011 following a grant from the National Park Service.

Since the end of World War II, there has been debate over the terminology used to refer to Minidoka, and the other camps in which Americans of Japanese ancestry and their immigrant parents, were incarcerated by the United States Government during the war. Minidoka has been referred to as a "War Relocation Center", "relocation camp", "relocation center", "internment camp", and "concentration camp", and the controversy over which term is the most accurate and appropriate continues to the present day.

Japanese-American internees in Idaho
at the Minidoka War Relocation Center

The internment camp site was listed on the National Register of Historic Places on July 10, 1979. A national monument was established in 2001 at the site by President Bill Clinton on January 17, as he invoked his authority under the Antiquities Act. As one of the newer units of the National Park System, it currently has temporary visitor facilities and services available on location. A new visitor contact station is being built and will open in 2020. Currently, visitors see the remains of the entry guard station, waiting room, and rock garden and can visit the Relocation Center display at the Jerome County Museum in nearby Jerome and the restored barracks building at the Idaho Farm and Ranch Museum southeast of town. There is a small marker adjacent to the remains of the guard station, and a larger sign at the intersection of Highway 25 and Hunt Road, which gives some of the history of the camp.

In 2006, President George W. Bush signed H.R. 1492 into law on December 21, guaranteeing $38 million in federal money to restore the Minidoka relocation center along with nine other former Japanese internment camps.

Less than two years later on May 8, 2008, President Bush signed the Wild Sky Wilderness Act into law, which changed the status of the former U.S. National Monument to National Historic Site and added the Bainbridge Island Japanese American Exclusion Memorial on Bainbridge Island, Washington to the monument. 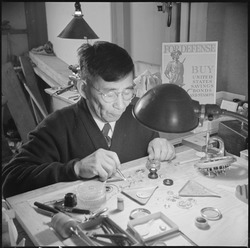 All content from Kiddle encyclopedia articles (including the article images and facts) can be freely used under Attribution-ShareAlike license, unless stated otherwise. Cite this article:
Minidoka National Historic Site Facts for Kids. Kiddle Encyclopedia.