The Mississippi Band of Choctaw Indians is one of three federally recognized tribes of Choctaw Native Americans, and the only one in the state of Mississippi. On April 20, 1945, this tribe organized under the Indian Reorganization Act of 1934. Their reservation in included lands in Neshoba, Leake, Newton, Scott, Jones, Attala, Kemper, and Winston counties.

The Mississippi Choctaw regained stewardship of their mother mound, Nanih Waiya mounds and cave in 2008. The Mississippi Band of Choctaw have declared August 18 as a tribal holiday to celebrate their regaining control of the sacred site.

The other two Choctaw tribes are the Choctaw Nation of Oklahoma, the third largest tribe in the United States, and the Jena Band of Choctaw Indians, located in Louisiana. 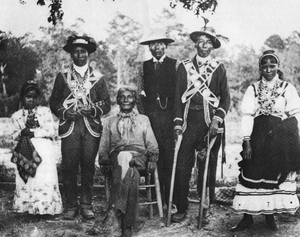 A Choctaw family in traditional clothing, 1908 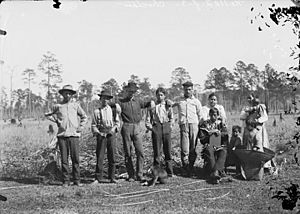 Group of eight Choctaw and two white men in 1909 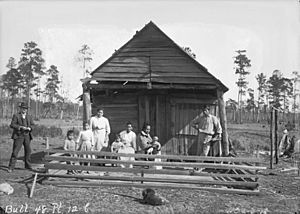 Choctaw group in front of their cabin in 1909

The Treaty of Dancing Rabbit Creek was ratified by the U.S. Senate on February 25, 1831, and U.S. President Andrew Jackson was anxious to make it a model of Indian removal to territory west of the Mississippi River. After ceding close to 11 million acres (45,000 km2), the Choctaw were to emigrate in three stages; the first in the fall of 1831, the second in 1832, and the last in 1833. Although the removals continued into the early 20th century, some Choctaw remained in Mississippi. They continued to live on their ancient homeland. The nearly 5000 Choctaw in Mississippi became citizens of the state and United States.

For the next ten years, they were objects of increasing legal conflict, harassment, and intimidation.

Conditions declined for the Choctaw after the Civil War and Reconstruction, as in the Democrats' effort to restore white supremacy, they passed a new constitution in 1890 that effectively disfranchised all blacks and people of color. In addition, under racial segregation and Jim Crow laws, the whites included all people of color in the category of "other" or black, and required them to use segregated facilities. This situation lasted until the middle of the twentieth century and passage of federal civil rights laws.

During the Great Depression and the Roosevelt Administration, officials began numerous initiatives to alleviate some of the social and economic conditions in the South. The 1933 Special Narrative Report described the dismal state of welfare of Mississippi Choctaw, whose population by 1930 had declined to 1,665 people. John Collier, the US Commissioner for Indian Affairs (now BIA), used the report as instrumental support in a proposal to re-organize the civilized Mississippi Choctaw as the Mississippi Band of Choctaw Indians. This enabled them to establish their own tribal government, as well as to have a beneficial relationship with the federal government.

In 1934, President Franklin Roosevelt signed into law the Indian Reorganization Act. This law proved critical for survival of the Mississippi Choctaw and other tribal peoples, who also reorganized in that era. Baxter York, Emmett York, and Joe Chitto worked on gaining recognition for the Choctaw. They realized that they needed to adopt a constitution. A rival organization, the Mississippi Choctaw Indian Federation, opposed tribal recognition because of fears of dominance by the Bureau of Indian Affairs (BIA). They disbanded after leaders of the opposition were moved to another jurisdiction. The first Tribal Council members of the Mississippi Band of Choctaw were Baxter and Emmett York with Joe Chitto as the first chairperson.

With the tribe's adoption of government, in 1944 the Secretary of the Interior declared that 18,000 acres (73 km2) would be held in trust for the Choctaw of Mississippi. Lands in Neshoba and surrounding counties were set aside as a federal Indian reservation. Eight communities were included in the reservation land: Bogue Chitto, Bogue Homa, Conehatta, Crystal Ridge, Pearl River, Red Water, Tucker, and Standing Pine.

Under the Indian Reorganization Act, the Mississippi Choctaws re-organized on April 20, 1945 as the Mississippi Band of Choctaw Indians. This gave them independence from the state government, which continued with its system of racial segregation under the Democratic Party.

In the 1950s, successive Republican administrations (supported by conservative Democrats in the South, still a one-party region) became impatient with gradual assimilation of Native Americans. In 1959, the Choctaw Termination Act was passed. They settled on a policy to terminate tribes as quickly as possible. Out of concern for the isolation of many Native Americans in rural areas, the federal government created relocation programs to cities to try to expand job and cultural opportunities for American Indians. Indian policy experts hoped to expedite assimilation of Native Americans to the larger American society, which was becoming increasingly urbanized.

The Choctaw people continued to struggle economically due to bigotry, cultural isolation, and lack of jobs. With reorganization and establishment of tribal government, however, over the next decades they took control of "schools, health care facilities, legal and judicial systems, and social service programs."

In the Civil Rights era, roughly between 1965 and 1982, Native Americans renewed their commitments to the value of their ancient heritage. Working to celebrate their own strengths and exercise appropriate rights, they dramatically reversed the trend toward abandonment of Indian culture and tradition. During the 1960s, Community Action programs connected with Native Americans were based on citizen participation. Democratic President John F. Kennedy decided against implementing additional terminations. He did enact some of the last terminations in process, such as with the Ponca. Both presidents Lyndon Johnson and Richard Nixon repudiated termination of the federal government's relationship with Native American tribes. {{cquote|We must affirm the right of the first Americans to remain Indians while exercising their rights as Americans. We must affirm their rights to freedom of choice and self-determination.|20px|20px|- President Lyndon Johnson.

The Choctaw witnessed the social forces that brought Freedom Summer to their ancient homeland. The Civil Rights Era produced significant social change for the Choctaw in Mississippi, as their civil rights were also enhanced. Prior to the Civil Rights Act of 1964, most jobs were given to whites, then blacks.

The Choctaw, who for 150 years had been neither white nor black, were "left where they had always been"—in poverty. Donna Ladd wrote that a Choctaw, now in her 40s, remembers "as a little girl, she thought that a 'white only' sign in a local store meant she could only order white, or vanilla, ice cream. It was a small story, but one that shows how a third race can easily get left out of the attempts for understanding." The end of legalized racial segregation permitted the Choctaw to participate in public institutions and facilities that had been reserved exclusively for white patrons.

In the 1970s, the Choctaw repudiated the extremes of Indian activism.Soon after this, Congress passed the landmark Indian Self-Determination and Education Assistance Act of 1975, completing a 15-year period of federal policy reform with regard to American Indian tribes. The legislation included authorizing tribes to negotiate contracts with the BIA to manage more of their own educational and social service programs. In addition, it provided direct grants to help tribes develop plans for assuming responsibility. It also provided for Indian parents' involvement on school boards.

Unless repealed by the federal government, the Choctaw Nation of Oklahoma would effectively be terminated as a sovereign nation as of August 25, 1970.

This is a speech from President Richard Nixon in a "Special Message on Indian Affairs", July 8, 1970:

"Forced termination is wrong, in my judgment, for a number of reasons. First, the premises on which it rests are wrong.... The second reason for rejecting forced termination is that the practical results have been clearly harmful in the few instances in which termination actually has been tried.... The third argument I would make against forced termination concerns the effect it has had upon the overwhelming majority of tribes which still enjoy a special relationship with the Federal government.... The recommendations of this administration represent an historic step forward in Indian policy. We are proposing to break sharply with past approaches to Indian problems."

Phillip Martin, who had served in the U.S. Army in Europe during World War II, returned to visit his former Neshoba County, Mississippi home. After seeing the poverty of his people, he decided to stay to help. Martin served as chairperson in various Choctaw committees up until 1977. Martin was elected as Chief of the Mississippi Band of Choctaw Indians. He served a total of 30 years, being re-elected until 2007. Will D. Campbell, a Baptist minister and Civil Rights activist, witnessed the destitution of the Choctaw. He would later write, "the thing I remember the most ... was the depressing sight of the Choctaws, their shanties along the country roads, grown men lounging on the dirt streets of their villages in demeaning idleness, sometimes drinking from a common bottle, sharing a roll-your-own cigarette, their half-clad children a picture of hurting that would never end."

Beginning in 1979, the tribal council worked on a variety of economic development initiatives, first geared toward attracting industry to the reservation. They had many people available to work, natural resources and no taxes. Industries have included automotive parts, greeting cards, direct mail and printing, and plastic-molding. The Mississippi Band of Choctaw Indians is one of the state's largest employers, running 19 businesses and employing 7,800 people.

In 1987 the Supreme Court of the United States ruled that federally recognized tribes could operate gaming facilities on their sovereign reservation land free from state regulation. In 1988 the U.S. Congress enacted the Indian Gaming Regulatory Act (IGRA); it set the terms for Native American tribes to operate casinos and negotiate terms with states, for instance, paying a portion of revenues in lieu of taxes.

Purporting to represent Native Americans before Congress and state governments in this new field, lobbyists Jack Abramoff and Michael Scanlon used fraudulent means to gain profits of $15 million in payment from the Mississippi Band of Choctaw Indians. In an e-mail sent January 29, 2002, Abramoff told Scanlon, "I have to meet with the monkeys from the Choctaw tribal council." Congressional hearings were held by the Senate Committee on Indian Affairs on this scandal in 2006, and charges were brought against Abramoff and Scanlon.

After nearly two hundred years, the Choctaw have retaken control of the ancient site of Nanih Waiya, an earthwork mound built about 1 CE-300 CE, which they venerate as their place of origin. For years protected as a Mississippi state park, Nanih Waiya was returned to the Choctaw in 2006, under Mississippi Legislature State Bill 2803. They consider it the home of their ancestors. The deed was signed on August 18, 2008, which the Choctaw have made a tribal holiday. They have celebrated the day since, and made it an occasion for telling and performances of dances and stories of their origin and history. 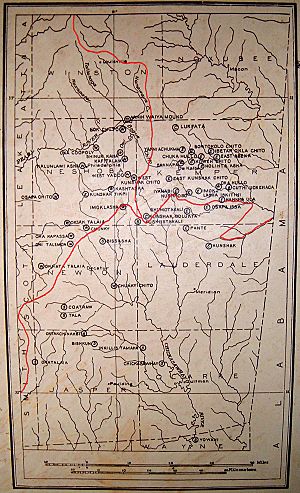 The Choctaw regularly traveled hundreds of miles from their homes for long periods of time, moving to seasonal hunting grounds in the winter. They set out early in the fall and returned to their reserved lands at the opening of spring to plant their gardens. At that time they visited the Europeans at Columbus, Mississippi; Macon, Brooksville, and Crawford, and the region where Yazoo City now is located.

All content from Kiddle encyclopedia articles (including the article images and facts) can be freely used under Attribution-ShareAlike license, unless stated otherwise. Cite this article:
Mississippi Band of Choctaw Indians Facts for Kids. Kiddle Encyclopedia.