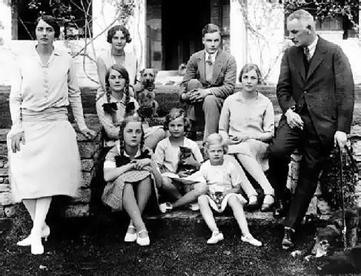 The Mitford family is an aristocratic English family, whose principal line had its seats at Mitford, Northumberland. Several heads of the family served as High Sheriff of Northumberland. A junior line, with seats at Newton Park, Northumberland, and Exbury House, Hampshire, descends via the historian William Mitford (1744–1827) and were twice elevated to the British peerage, in 1802 and 1902, under the title Baron Redesdale.

The family became particularly known in the 1930s and later for the six Mitford sisters, great-great-great-granddaughters of William Mitford, and the daughters of David Freeman-Mitford, 2nd Baron Redesdale, and his wife Sydney Bowles. They were celebrated and at times scandalous figures, who were described by The Times journalist Ben Macintyre as "Diana the Fascist, Jessica the Communist, Unity the Hitler-lover; Nancy the Novelist; Deborah the Duchess and Pamela the unobtrusive poultry connoisseur".

All content from Kiddle encyclopedia articles (including the article images and facts) can be freely used under Attribution-ShareAlike license, unless stated otherwise. Cite this article:
Mitford family Facts for Kids. Kiddle Encyclopedia.