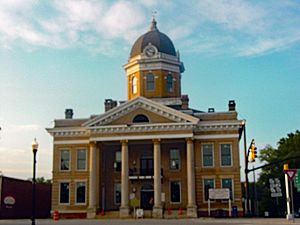 Monticello is the largest city and the county seat of Jasper County, Georgia, United States. The city includes historic buildings such as the Jasper County Courthouse, Monticello High School and the Monticello Historic District. The population was 2,428 at the 2000 census. It is 61 miles south of Atlanta.

Monticello was founded in 1808 as seat of the newly formed Jasper County. It was incorporated as a town in 1810 and as a city in 1901.

On January 14, 1915, about 100 white men of Monticello formed a lynch mob and lynched a black family of four, including two married women. They took Dan Barber, his son Jesse Barber, and two married daughters Bula and Ella (Barber) Charles from the county jail, where they had been put after being arrested for attacking the chief of police. He had challenged Dan Barber in his house for making liquor illegally. The mob shot and hanged each of the four.

There were 927 households out of which 33.9% had children under the age of 18 living with them, 40.0% were married couples living together, 22.0% had a female householder with no husband present, and 34.3% were non-families. 31.1% of all households were made up of individuals and 14.7% had someone living alone who was 65 years of age or older. The average household size was 2.56 and the average family size was 3.21.

The bedrock under Monticello is an intermediate-to-mafic type on which dark red clay with dark reddish brown loam topsoil is mapped as Lloyd series.

All content from Kiddle encyclopedia articles (including the article images and facts) can be freely used under Attribution-ShareAlike license, unless stated otherwise. Cite this article:
Monticello, Georgia Facts for Kids. Kiddle Encyclopedia.