Kids Encyclopedia Facts
Not to be confused with Murray Hill, Kentucky, near Louisville.

It is the home of Murray State University. 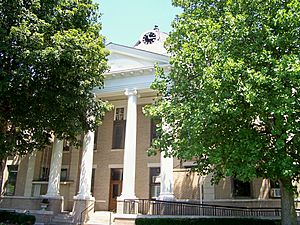 The city now known as Murray began as a post office and trading center sometime in the early 1820s. It was at first called Williston in honor of James Willis, an early settler. Later, the name was changed to Pooltown after Robert Pool, a local merchant. The name was changed again to Pleasant Springs before its incorporation on January 17, 1844, when the present name was adopted to honor Rep. John Murray.

Murray was not the first county seat, which was at Wadesboro. Calloway County was then much larger than today. In 1842, however, the state legislature divided the area, creating Marshall County. It was felt that a more centrally located county seat was needed, and as the village of Murray was at the geographic center, it was chosen. A new courthouse was built along with a jail, and the town Murray was laid out on an 80-acre (320,000 m2) plot subdivided into 137 business and residential lots divided by eight streets. 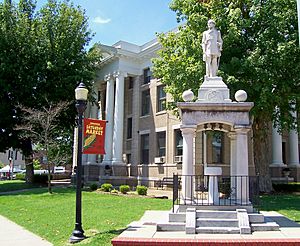 Kentucky did not officially secede from the Union during the Civil War, instead declaring its neutrality, but both Murray and Calloway County were strongly pro-Confederate. No major battles were fought near the town, but guerrilla warfare sometimes took place nearby. In the spring of 1862, a Union force stationed in Paducah marched across the county to the Tennessee River, taking anything it wanted from the inhabitants without paying. Also, parts of Murray were burned on several occasions. Once, part of the town was burned by the Union Army in retaliation for its presumed support for the Confederate guerrillas. A diary kept by Josh Ellison of Murray tells that one night during the winter of 1864-65, a detachment of Union soldiers from Paducah torched every buildings on the east side of the court square, three days later burning all those north of the square.

An estimated 800 men from the area joined in the Confederate Army, either as infantry in the Kentucky Orphan Brigade or in the cavalry, while about 200 sided with the Union. Calloway County's Confederate veterans are honored by monument on the northeast side of the court house square. Donated by the United Daughters of the Confederacy, it is the only Confederate monument in the South that does not face true north. There are several tales about the reason for this, but nowadays no one really knows.

Murray has had several tornadoes and storms in recent years and has been the site of two F4 tornadoes. On February 5, 2008, Kentucky and surrounding states were subject to many violent tornadoes with some of them in Western Kentucky. On June 30, 2009, a violent storm with winds of up to 90 miles per hour (140 km/h) ravaged trees and damaged buildings. On July 4, 2009 another tornado outbreak in Western Kentucky left Independence Day celebrations spoiled throughout the region.

There were 6,004 households out of which 19.5% had children under the age of 18 living with them, 35.6% were married couples living together, 9.5% had a female householder with no husband present, and 52.2% were non-families. 39.1% of all households were made up of individuals and 13.6% had someone living alone who was 65 years of age or older. The average household size was 2.02 and the average family size was 2.70.

The city of Murray is host to several religious assemblies of various faiths. There are approximately 75 religious institutions within the city of Murray and surrounding area. Some of the denominations that make their home in Murray include, Baptist, Catholic, Episcopal, The Church of Jesus Christ of Latter-day Saints, Christian Science, Church of Christ, Christian Church (Disciples of Christ), Pentecostal, Presbyterian, Methodist, and Non-Denominational. Baptists are the most prominent faith in Murray with over 25 Baptist churches within the Murray area.

Murray plays host to several annual festivals and events. Perhaps the most well known Murray festival is the annual Freedom Fest celebration. The dates of the festival vary from year to year, but are always near the end of June through the first week of July. During the festival, activities include a parade, a farmer's market, a 5 kilometres (3.1 mi) run, and a street fair, as well as the signature Fireworks Extravaganza which draws crowds from all over the region. In 2004 Freedom Fest added Squealin' on the Square, a Kansas City Barbeque Society competition which attracted competitors from across the south and mid-west. The largest event of Freedom Fest was the annual concert put on by a local radio station. Artists who have played in the past are: Confederate Railroad, Lonestar, Travis Tritt, Sara Evans and Trace Adkins

Dickens Alley, also well known in the region, is held during the first weekend in December. The festival turns historic downtown Murray into olde London from centuries ago. Activities include a street fair, home-baked goods for sale and carolers dressed from the period.

Other festivals include the West Kentucky Highland Games and Festival, the Lumberjack Challenge, the RC Aircraft Fly-in and the Murray Ice Cream Festival (which occurs in early September)

Murray State University has hosted Festival of Champions as the oldest, largest, and most prestigious marching band festivals of its kind in the South since 1976. This annual competition hosts bands from throughout Illinois, Indiana, Kentucky, Missouri and Tennessee with over 1,500 students each fall. It is sanctioned by the Kentucky Music Educators Association as part of its marching band contest season. <http://kyband.com/home/festival-of-champions/>

On October 4, 2008, a Bands of America regional competition was held at Murray State University. The competition included marching band performances from various high schools from the southeast and an exhibition performance by the Murray State Racer Band. 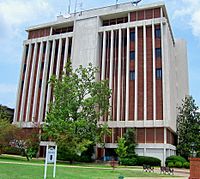 The Clara M. Eagle Gallery is located in the Fine Arts Building.

Murray offers tourists and citizens tastes of culture that are usually only available in larger cities. The Clara M. Eagle Gallery is a multi-level art gallery that houses around 1,200 permanent artworks. The gallery has also been home to temporary shows, featuring contemporary art, African art, woodworking, and tapestries from Spain among others. The galleries have near 8,300 square feet (770 m2) of show space. 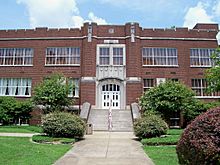 The Wrather West Kentucky Museum is located in the first building constructed on the campus of Murray State University and has been placed on the National Register of Historic Places. The museum, which is free to the public, highlights the social development, economic and cultural development of the people of the Jackson Purchase region of Kentucky through permanent and changing exhibits.

Playhouse in the Park

Playhouse in the Park Community Theatre

Playhouse in the Park is one of the oldest community theatres in the state of Kentucky. The theatre is located in Murray's Central Park and is housed in a 1907 train and freight depot. The playhouse is open year-round and produces everything including original works, comedies, dramas, children's theatre, and musicals. On May 16, 2008, former President Bill Clinton made an appearance at Playhouse in the Park to speak about his wife's (Hillary Clinton) presidency campaign.

College athletics are the sporting events of choice in the Murray area. Murray State University participates in NCAA Division I athletics which is the highest level of collegiate athletics. The university has 16 athletic programs that compete in the Ohio Valley Conference and have provided 117 conference titles since 1948. The most popular sport at Murray State is the men's basketball program. The basketball program is one of the winningest programs in NCAA history with over 1,300 wins and an all-time winning percentage of .637, which places Murray State 20th best in NCAA history. Murray State has won 23 regular season Ohio Valley Conference titles and 15 OVC Tournament titles, which is the best in the OVC. The men's basketball program has produced a number of NBA players, most notably Jeff Martin, Popeye Jones, Isaiah Canaan, Cameron Payne, and Joe Fulks, who is a Basketball Hall of Fame inductee and has been credited with being one of the pioneers of the jump shot.

Murray has two movie theaters. The Cheri Theater has seven screens and shows nothing but first-run films. The Cheri was started in 1967 as a single-screen theater with seating for 600. There have been many additions and renovations throughout the years and in 1997, two 290 stadium seating auditoriums were added. In 2008, the theater upgraded its projectors to take advantage of Dolby 3D Technology.

The Curris Center Theater hosts Cinema International. The program is run through the department of modern languages at Murray State and is open, free of charge, to students and the public. Cinema International is open most weekends during regular university semesters. Around 18 shows per year showcase every film genre by directors around the world.

All content from Kiddle encyclopedia articles (including the article images and facts) can be freely used under Attribution-ShareAlike license, unless stated otherwise. Cite this article:
Murray, Kentucky Facts for Kids. Kiddle Encyclopedia.