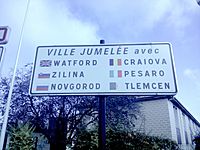 Nanterre is a town in the west suburbs of Paris, France. Nanterre is the prefecture (capital) of the Hauts-de-Seine département and is in the Île-de-France region. Its population is about 84,000 (March 8, 1999 census). Its density is about 7,200/km².

Eastern Nanterre, contains a part of the La Défense business district of Paris and some of the tallest buildings in Paris. The city of Nanterre also includes the University called Paris X – Nanterre, and its one of the largest in the Paris region.

All content from Kiddle encyclopedia articles (including the article images and facts) can be freely used under Attribution-ShareAlike license, unless stated otherwise. Cite this article:
Nanterre Facts for Kids. Kiddle Encyclopedia.