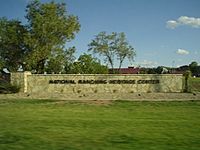 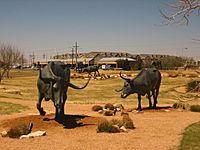 The National Ranching Heritage Center, a museum of ranching history, is located on the campus of Texas Tech University in Lubbock, Texas. The NRHC features almost fifty authentic ranch buildings dating from the late 18th to the mid-20th century. These structures include a railroad depot, homesteads, barn, blacksmith shop, schoolhouse, windmills and other historic structures. One views the exhibits through a self-guided walking tour. It is free to the public.

The center was established in 1969 by the Ranching Heritage Association. Its first director was the historian and archaeologist William Curry Holden From 1977 to 1980, Jim Humphreys, who managed the Pitchfork Ranch in Dickens and King counties from 1965 to 1986, was the board chairman. Until 1999, the NRHC was a part of the Museum of Texas Tech University, to which it is adjacently located.

The NRHC has received donations from Montie Ritchie, the manager of the JA Ranch southeast of Amarillo from 1935 until his retirement in 1993.

In 2013, David M. "Matt" Brockman was named NRHC executive director. Formerly, he has been the administrative manager of the Southwestern Exposition and Livestock Show, commonly known as the Fort Worth Stock Show and Rodeo.

Also in 2013, Miguel Martinez, a 14-year-old from Lubbock, was impaled through the chest by the horn of a bull statue while playing hide-and-seek at night in front of the National Ranching Heritage Center.

The home of the wealthy African-American rancher, Daniel Webster Wallace, known as "80 John" Wallace, was built ca. 1900 in Loraine in Mitchell County. It is now open at the NRHC.

On January 22, 2019, the Heritage Center launched an exhibit which shows the importance of the different breeds of cattle brought into the southwestern United States. The first cattle, explains the exhibit, were Andalusian brought to the continent in the second voyage of Christopher Columbus. Later breeds, such as Hereford, Angus, and the Texas Longhorn shaped the destiny of the American West.

All content from Kiddle encyclopedia articles (including the article images and facts) can be freely used under Attribution-ShareAlike license, unless stated otherwise. Cite this article:
National Ranching Heritage Center Facts for Kids. Kiddle Encyclopedia.