Neenach ( NEE-nak) is an agricultural settlement in northwestern Los Angeles County, California, with a population of about 800. It is facing a massive change with the proposed construction of a 23,000-home planned community to its north called Centennial.

Neenach is 34 miles northwest of Lancaster in the Antelope Valley portion of Southern California. It is 15 miles southeast of Gorman in the Sierra Pelona Mountains, and 74 miles from the county seat in downtown Los Angeles. It lies southeast of Tejon Ranch, one of California’s oldest working ranches. It lies directly on a stretch of the San Andreas Fault that is overdue for a large earthquake, and produced one of the largest earthquakes in California history back in 1857, registering an estimated 7.9 magnitude.

This region experiences warm (but not hot) and dry summers, with no average monthly temperatures above 71.6 °F. According to the Köppen Climate Classification system, Neenach has a warm-summer Mediterranean climate, abbreviated "Csb" on climate maps.

The original name for present day Neenach, is puyutsiwamǝŋ. This is in the Kitanemuk language. The Spanish referred to it as, Ojo de la Vaca, or Eye of the Cow (Cow Springs.)

An early 19th century name for the area was Cow Springs (34°46′22″N 118°37′17″W﻿ / ﻿34.77273°N 118.62134°W﻿ / 34.77273; -118.62134), about a mile southwest of today's Neenach School. El Camino Viejo, passed from Laguna Chico Lopez north via Willow Springs Canyon, then west to the water at Aquaje Lodoso, then to Cow Springs and on to Tejon Pass. Later a shorter route was followed by the Stockton - Los Angeles Road and the Butterfield Overland Mail between Elizabeth Lake and Gorman. Instead of going north they went westward via the San Andreas Rift to Oakgrove Canyon then north via Pine Canyon to Antelope Valley and Cow Springs. French Johns Station, 14 miles east of Gorman, near Cow Springs provided a way station for the stage line, teamsters and other travelers.

Neenach itself was founded in the 1870s by Danish settlers from Neenah, Wisconsin. In 1888, a post office was established, with John A. Coovert as the first postmaster. In September 1905 Christian Clausen was named postmaster.

James Anderson filed a homestead claim for 160 acres (647,000 m²) at present-day State Route 138 and 300th Street West in 1887. He had a county contract to maintain and improve roads in the Antelope Valley as far as Three Points.

Construction of the Los Angeles Aqueduct between 1905 and 1913, which brought water from the distant Owens Valley to the San Fernando Valley, was important to the area.

On July 13, 1917, Chief Water Engineer William Mulholland of the city of Los Angeles, the builder of the aqueduct, received word that the line had been broken. He went to Neenach and found a 60-foot rupture. He ordered additional surveillance, which saw the arrest of one man, an employee of the rival Los Angeles Gas and Electric Company. The suspect was later released.

James Anderson became a line rider or patrolman on the aqueduct: He had to shut down the tunnel periodically to check its condition. He also checked the surface to verify that none of the aqueduct’s opponents had damaged it. Harry Womersley, from England by way of Illinois, was another resident who worked on the aqueduct—the 12 miles from Fairmont to Neenach.

Gold was discovered in the hills south of the community in the early 1930s. The “Oh Suzanna” mine produced some $7 million over the few years of its operation.

In the 1970s, Neenach was lively, one resident told a reporter. There were community-wide potluck dinners and almost 80 members in the local 4-H Club. Since then, he said, many of the kids moved away as soon as they were able.

A portion of nearby Tejon Ranch called Centennial is proposed to be a 23,000-home master-planned community adjacent to Neenach. Civic squares, parks, shops, three fire stations, and other services are proposed. Children would be encouraged to walk to one of the eight elementary schools planned. The promoters have pledged to create 30,000 local jobs. On average, a new house would be erected every eight hours, seven days a week, for 20 years.

The Tucson, Arizona,-based Center for Biological Diversity, however, opposes the project—claiming that Centennial would be built on rare ecosystems, including the largest native grassland left in California. The proposal has yet to be approved by county officials. 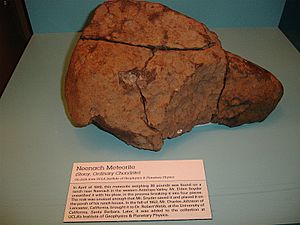 The Neenach Meteorite, discovered in 1948 and photographed in 2007

The Neenach Meteorite is a 30-pound mass of stony, ordinary chondrite discovered in April 1948 by Elden Snyder of Neenach when he unearthed it with his plow, in the process breaking it into four pieces. In 1952 it was brought to the attention of Robert Wallace Webb of the University of California, Santa Barbara. Later it was donated to the collection of the Institute of Geophysics and Planetary Physics at the University of California, Los Angeles.

A range of lifestyles in Neenach

Click the images to see larger versions of the photos.

The school closed a few years back when they ran out of kids, and its rose-painted walls are still the brightest thing on the prairie. 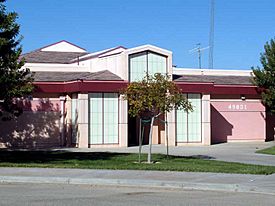 Neenach Elementary School, shown in 2008, had no students but was kept in good condition.

The present Neenach School building was opened in 1993 to replace an older building that had stood for decades on a neighboring lot. The school was closed in 2001 because of dwindling population and high heating costs; lack of a natural-gas source meant the school was all-electric. Sixty-six pupils were enrolled the previous year.

All content from Kiddle encyclopedia articles (including the article images and facts) can be freely used under Attribution-ShareAlike license, unless stated otherwise. Cite this article:
Neenach, California Facts for Kids. Kiddle Encyclopedia.