New Cuyama is a census-designated place in the Cuyama Valley, in Santa Barbara County, California, in the United States. It was named after the Chumash Indian word for "clams", most likely due to the millions of petrified prehistoric clamshell fossils that are found in the surrounding areas. The town is home to the majority of the utility infrastructure for its residents, including nearby neighbor Cuyama, California. New Cuyama is located very close to the intersection points for Santa Barbara, San Luis Obispo, Ventura and Kern counties. The town is served by Highway 166 (connecting U.S. Route 101 and Interstate 5) and the public-use New Cuyama Airport. The population was 517 at the 2010 census.

The area was considered territory of the Yokuts people, but Chumash Indians from the Pacific Coast are also known to have frequented the area. The imprint of an old Indian trail can still be seen leading over the hills of present-day Ventura County to the headwaters of Piru Creek. The name "Cuyama" comes from an Indian village named for the Chumash word kuyam, meaning "clam" or "freshwater mollusk".

The area's recorded history dates to 1822 when Mexico won independence from Spain and took over the Spanish colony of Alta California. Two Mexican land grants, the Rancho Cuyama (Lataillade) and Rancho Cuyama (Rojo), were granted in the 1840s by Governors Manuel Micheltorena and Pío Pico in the lower Cuyama Valley along the Cuyama River, where current New Cuyama is, privatizing ownership of the land.

Following the 1949 discovery of oil at the South Cuyama Oil Field, in 1952 the Atlantic Richfield Company (ARCO) settled and developed the town of New Cuyama, building housing and associated commercial business – including the New Cuyama Airport (L88), reopened in May 2015, which bears the distinction of being the only public-use paved airport within easy flying range of Los Angeles for more than 50 miles (80 km). Much of the infrastructure from ARCO's settling of the town still exists today and is used by town residents. The original ARCO-built gas processing plant is still in use and easily seen due south of New Cuyama, though ARCO has since sold off interest in the facility.

The town of New Cuyama, when founded, was considered the pearl of eastern Santa Barbara County, due to the flow of oil that was coming out of the region. During this time Richfield Oil Company built the town funded schools and provided all the important utilities other than electricity. Now that oil and gas production have declined, the principal industry is once again agriculture.

According to the United States Census Bureau, the CDP covers an area of 0.7 square miles (1.8 km²), all of it land. 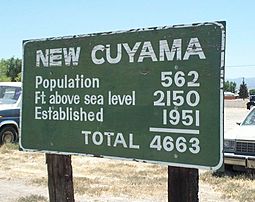 This region experiences warm (but not hot) and dry summers, with no average monthly temperatures above 71.6 °F.

All content from Kiddle encyclopedia articles (including the article images and facts) can be freely used under Attribution-ShareAlike license, unless stated otherwise. Cite this article:
New Cuyama, California Facts for Kids. Kiddle Encyclopedia.