Lincoln's New Salem State Historic Site is a reconstruction of the former village of New Salem in Menard County, Illinois, where Abraham Lincoln lived from 1831 to 1837. While in his twenties, the future U.S. President made his living in this frontier village as a boatman, soldier in the Black Hawk War, general store owner, postmaster, surveyor, and rail splitter, and was first elected to the Illinois General Assembly.

Lincoln left New Salem for Springfield in 1837, and the village was generally abandoned by about 1840, as other towns developed. In the 1930s, the Civilian Conservation Corps built a historic recreation of New Salem based on its original foundations, establishing a state park commemorating Lincoln and Illinois' frontier history. The village is located 15 mi (24 km) northwest of Springfield, and approximately 3 mi (4.8 km) south of Petersburg. 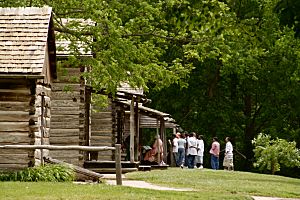 New Salem was founded in 1828, when James Rutledge and John Camron built a gristmill on the Sangamon River. They surveyed and sold village lots for commercial business and homes on the ridge stretching to the west above the mill. Over the first few years of its existence, the town grew rapidly, but after the county seat was located in nearby Petersburg, the village began to shrink and by 1840, it was abandoned. The fact that the Sangamon River was not well-suited for steamboat travel was also a reason for the town's decline.

In 1831, when Abraham Lincoln's father, Thomas, relocated the family to a new homestead in Coles County, Illinois, 22-year-old Lincoln struck out on his own. Lincoln arrived in New Salem by way of flatboat and he remained in the village for about six years. During his stay, Lincoln earned a living as a shopkeeper, soldier in the Black Hawk War, general store owner, postmaster, land surveyor, and rail splitter, as well as doing odd jobs around the village. As far as historians know, Lincoln never owned a home in the village as most single men did not own homes at this time; however, he would often sleep in the tavern or his general store and take his meals with a nearby family.

He ran for the Illinois General Assembly in 1832, handily winning his New Salem precinct but losing the countywide district election. He tried again in 1834 and won. Lincoln left New Salem and moved to Springfield, also in his election district, around 1837.

When Lincoln lived in New Salem, the village was home to a cooper shop, blacksmith shop, wool carding mill, four general stores, a tavern, a grocery, two doctors' offices, a shoemaker, a carpenter, a hat maker, a tanner, a schoolhouse/church, several residences, common pastures, and kitchen gardens. During its short existence, the village was home to anywhere from 20 to 25 families at a time. New Salem was not a small farm village, but instead a commercial village full of young businessmen and craftsmen trying to start a new life on the frontier. 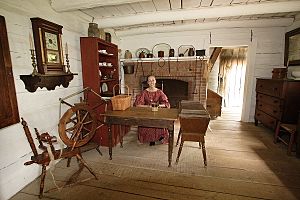 In 1906, William Randolph Hearst purchased the village land and deeded it to the Old Salem Chautauqua Association. In 1919, the land was gifted to the State of Illinois. The current village site was open to the public on May 19, 1921 and rebuilt on the foundations of the original village, mostly by the Civilian Conservation Corps, during the Great Depression. The location is presently called Lincoln's New Salem State Historic Site, featuring 23 buildings, mostly log cabins and costumed interpreters, representing the era of Lincoln's residency. The cabins, shops, and businesses are furnished by period implements, objects, and furniture, with many acquired from area farms and homes. In addition to the village, the 700 acres (280 ha) park includes extensive woodlands.

Twenty-two of the village buildings are reconstructed; one log cabin, the Onstot Cooper Shop, is original, although it had been previously moved by Henry Onstot to Petersburg in 1840. In 1922, it was returned to New Salem on what archeologists believe was its original foundation. In addition to archeological investigations, much of the town was recreated based on period documents and the recollections and drawings of former residents interviewed in the late 19th century.

In the summer of 1961, after a period of design and fabrication, a 73-foot, 40-ton, upper-cabin sternwheel steamboat made its way from Dubuque, Iowa to New Salem by way of the Mississippi River, Illinois River, and the Sangamon River. The steamer, christened the Talisman, was a scaled-down recreation of the original boat that ventured from Cincinnati, Ohio, down the Ohio River, up the Mississippi and Illinois Rivers, and into central Illinois on the Sangamon under the charter of Springfield businessman Vincent Bogue in 1832. The original Talisman was actually a 136-foot, 150-ton steamer, and may or may not have been a sidewheel boat. Lincoln helped clear obstructions from the riverbanks on the Talisman's trip upriver, and co-piloted the steamer with Rowan Herndon back to Beardstown. The recreation boat was given a landing next to the Rutledge Camron Saw and Grist Mill site on the riverbank, and tourists had the opportunity to take short excursions on the river. Unfortunately, just like the original Talisman, the recreated steamer was plagued by low water levels on the river which gradually diminished in the years following its arrival at New Salem, which made navigation difficult to impossible. The boat was finally grounded in the late 1990s a few miles upriver from the historical site, and now serves as a large lawn decoration about a hundred feet from the riverbank.

Lincoln's New Salem was visited by approximately 600,000 people in 2006. It was added to the National Register of Historic Places in 1972, under the name, Lincoln's New Salem Village. The park includes a visitor's center with a museum and theater.

All content from Kiddle encyclopedia articles (including the article images and facts) can be freely used under Attribution-ShareAlike license, unless stated otherwise. Cite this article:
Lincoln's New Salem Facts for Kids. Kiddle Encyclopedia.