New York State Route 308 (NY 308, Route 308) is a short road in Dutchess County, New York. The highway is 6.19 miles (9.96 km) long. It goes through mostly rural areas, and is usually used as a shortcut from U.S. Route 9 (US 9) to New York State Route 9G. The road passes several landmarks along its path. The road began its history in about 1685, when a group of Native Americans built the Sepasco Trail. This trail went from the Hudson River to Lake Sepasco, and followed the same path that currently exists as Route 308. The trail was there until 1802, when part of the Ulster and Delaware Turnpike was built over it. Route 308 was officially formed in 1930. 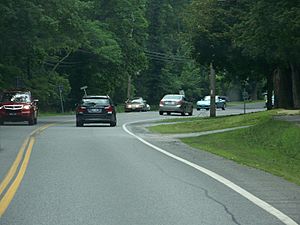 Part of NY 308 is in the Rhinebeck Village Historic District, which is a 1,670 acres (680 ha) area that has 272 historical buildings. It was added to the National Register of Historic Places in 1979. A well-known attraction is the Beekman Arms Inn, which is located at the corner of NY 308 and US 9. The inn was started in 1776, and says it is one of the oldest inns within the United States.

The road begins at US 9 in the village of Rhinebeck, which is 200 feet (61 m) above sea level. To the south of here is a park, a small lake, and a cemetery. At this point, the Dutchess County Fairgrounds are north of Route 308. The highway goes to the east, and is called East Market Street. It soon leaves Rhinebeck, while it runs next to a small creek sometimes known as the Landsman Kill.

The earliest people that lived in northern Dutchess County were the Mohicans. They were a Native American nation that came to the area about 3,000 years ago. There were around 8,000 Mohicans during the time they first saw the Europeans. However, there were only 800 after the American Revolution. Artifacts were found along the shore of Lake Sepasco, which is a small lake near NY 308. The artifacts included very old arrowheads, and are now being shown at a local museum. 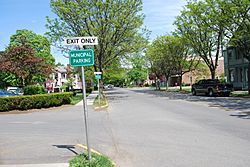 NY 308 in the village of Rhinebeck, near the intersection with US 9

The trail was there until 1802, when a turnpike, a type of road, was built over it "for improving and making a road from the west line of the Town of Salisbury in the State of Connecticut to the Susquehannah [sic] River at or near the Town of Jericho". The part of the new turnpike east of the Hudson River was sometimes known as the Ulster and Salisbury Turnpike. A plaque was placed in November 1922 at the Beekman Arms Inn. The sign marked the crossing of the Kings Highway (now called US 9) and the Ulster and Salisbury Turnpike.

The entire route is in Dutchess County.

All content from Kiddle encyclopedia articles (including the article images and facts) can be freely used under Attribution-ShareAlike license, unless stated otherwise. Cite this article:
New York State Route 308 Facts for Kids. Kiddle Encyclopedia.