The medieval lost town of Newtown Jerpoint is just west of the Cistercian Jerpoint Abbey, near Thomastown, County Kilkenny, Ireland. It is located 3.2 km south west from Thomastown just off the R448 regional road. In the grounds of the privately owned Jerpoint Park. St. Nicholas’s Church and graveyard are in the town, where the earthly remains of St. Nicholas of Myra are said to be buried. Belmore House stands at the top of the town. 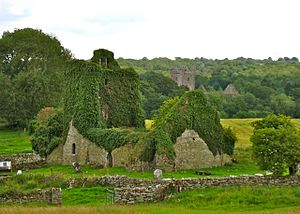 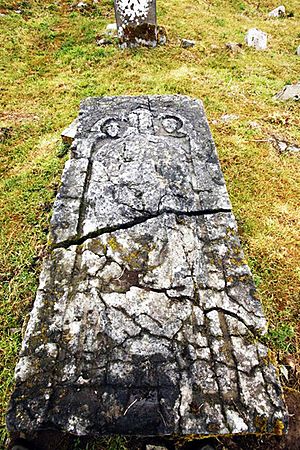 St. Nicholas who inspired the legend of Santa Claus is believed to have been buried in Newtown Jerpoint some 800 years ago. The grave slab features a cleric with the heads of two knights behind each shoulder and is said to be St Nicholas and the heads, the two crusaders who, so the story goes, brought Nicholas' remains back to Ireland. Evidence lends some possible credence to this tale as the Normans in Kilkenny were keen collectors of religious relics. And it is known that Norman knights participated in the Holy Land Crusades 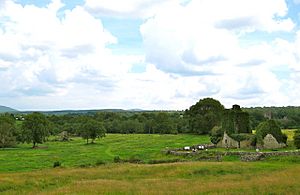 View of the Lost Town of Newtown Jerpoint

A survey was commissioned in 2007 by the Heritage Council Ireland and the Discovery Programme that used Lidar to show the extent of Newtown Jerpoint. "One of Ireland’s best surviving examples of a deserted 12th Century Medieval Town" ....... Quote from The Heritage Council of Ireland

All content from Kiddle encyclopedia articles (including the article images and facts) can be freely used under Attribution-ShareAlike license, unless stated otherwise. Cite this article:
Newtown Jerpoint Facts for Kids. Kiddle Encyclopedia.