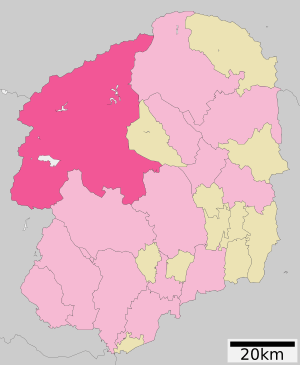 Nikkō (日光市code: ja is deprecated , Nikkō-shi) is a city located in Tochigi Prefecture, Japan. As of May 2015, the city had an estimated population of 84,197, and a population density of 58.1 persons per km2. Its total area is 1,449.83 km2. It is a popular destination for Japanese and international tourists. Attractions include the mausoleum of shōgun Tokugawa Ieyasu (Nikkō Tōshō-gū) and that of his grandson Iemitsu (Iemitsu-byō Taiyū-in), and the Futarasan Shrine, which dates to the year 767. There are also many famous hot springs (onsen) in the area. Elevations range from 200 to 2,000 m. The Japanese saying "Never say 'kekkō' until you've seen Nikkō"—kekkō meaning beautiful, magnificent or "I am satisfied"—is a reflection of the beauty and sites in Nikkō.

The Shinto shrine of Nikkō Tōshō-gū was completed in 1617. It is the burial place of Tokugawa Ieyasu.

The shrines and temples of Nikkō have been recongized as a UNESCO World Heritage Site.

Nikkō covers a large area (1,449.83 km²) of rural northwestern Tochigi approximately 140 km north of Tokyo and 35 km west of Utsunomiya, the capital of Tochigi Prefecture. It is the third-largest city (by area) in Japan, behind Takayama and Hamamatsu.

Both the Watarase River and the Kinugawa River pass through the city. Lake Chūzenji and the Kegon Falls lie in Nikkō, as does the Nikko Botanical Garden. The city's many mountains and waterfalls have made it an important source of hydroelectric power. The area has also been used for mining copper, aluminum and concrete.

The weather in Nikkō is fairly similar to that of the northern island of Hokkaidō, even though Nikkō is much closer to Tokyo than Hokkaidō. The elevation of Nikkō plays an important role in this fact. It will usually get cooler as one ascends the mountain. The average temperature of Nikkō is around 7 °C (44 °F) with the warmest months reaching only about 22 °C (72 °F) and the coldest reaching down to about -8 °C (17 °F).

All content from Kiddle encyclopedia articles (including the article images and facts) can be freely used under Attribution-ShareAlike license, unless stated otherwise. Cite this article:
Nikkō, Tochigi Facts for Kids. Kiddle Encyclopedia.