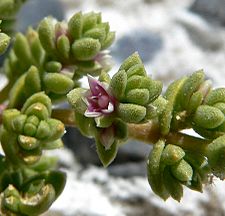 Nitrophila mohavensis is a rare species of flowering plant in the family Amaranthaceae known by the common name Amargosa niterwort. It is endemic to Nye County in southwestern Nevada and Inyo County, in eastern California.

Nitrophila mohavensis is endemic to the Amargosa Desert, straddling the border of California and Nevada east of Death Valley and near Death Valley National Park. There are three occurrences known on the Nevada side and fewer than five occurrences in California.

The plant grows only in alkaline salt pans made up of moist and drying, salt-encrusted clay soils surrounded by other halophytes, such as Atriplex confertifolia and Cleomella brevipes.

The inflorescence is a solitary flower or cluster of a few flowers emerging from between the leaves. The flower lacks petals but has pink petallike sepals which fade white with age.

Nitrophila mohavensis is a federally listed endangered species. Its range is restricted and highly localized, making it vulnerable to severe losses or extinction in a single event.

The plant only occurs within and around the remnants of Carson Slough in the Ash Meadows area, including within Ash Meadows National Wildlife Refuge which is a protected area but is still affected by alterations in the hydrology of the landscape. The plant relies on saturation of its soil by a high water table, and the main threat to its existence is the pumping of groundwater. Other threats include potassium and zeolite mining in the area and occasional illegal off-road vehicle use.

All content from Kiddle encyclopedia articles (including the article images and facts) can be freely used under Attribution-ShareAlike license, unless stated otherwise. Cite this article:
Nitrophila mohavensis Facts for Kids. Kiddle Encyclopedia.