North Fork is also home of the Sierra Mono Museum and the starting point of the Sierra Scenic Byway. The town boasts one grocery store, three restaurants (one of which is part of the town's bar) and two gas stations.

The Northfork Rancheria of Mono Indians of California maintains their tribal headquarters in North Fork. The Sierra Mono Museum is also located here.

North Fork is also the home of the US Forest Service Crane Valley Hotshots, an elite crew of wildland firefighters.

North Fork is located in the foothills of the Sierra Nevada at an elevation of 2638 feet (804 m). According to the 2000 U.S. Census the population of the 93643 zip code area was 3,360 with a median age of 44.8 years. The community is inside area code 559. It is part of the Madera–Chowchilla Metropolitan Statistical Area. 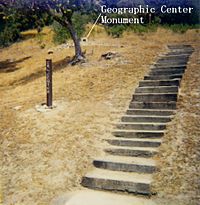 The geographic center of the state of California is located between North Fork and Italian Bar. The point is about 7.1 miles (11.4 km) driving distance from the United States Forest Service office in North Fork. The location is marked by a sign and a survey marker. NAD83 coordinates for the exact center of California are 37°09′58″N 119°26′58″W﻿ / ﻿37.16611°N 119.44944°W﻿ / 37.16611; -119.44944 The Fresno County line is less than one mile (1.6 km), (straight-line distance), from the site's survey marker. The site is also marked on the United States Forest Service road map of Sierra National Forest, which can be purchased at the North Fork USFS office. The actual site has wooden stairs leading up the hillside about 50 feet from the road. The marker is not wheelchair accessible.

North Fork has a Mediterranean climate (Köppen Cfa) with cool, rainy winters and hot, dry summers. Its average annual precipitation is 33.43 in (849 mm). Its hardiness zone is 7b.

The town's original inhabitants were members of the Mono tribe, who still comprise a significant portion of the population (9.4% according to the 2000 Census). The town was originally named Brown's after its first white settler, Milton Brown. The name North Fork came from the North Fork Lumber Company. The North Fork post office opened in 1888.

North Fork's economy was based in the timber industry until the local lumber mill closed in 1996.

All content from Kiddle encyclopedia articles (including the article images and facts) can be freely used under Attribution-ShareAlike license, unless stated otherwise. Cite this article:
North Fork, California Facts for Kids. Kiddle Encyclopedia.