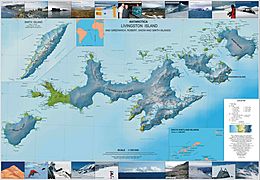 Onogur Islands (Bulgarian: Оногурски острови, ‘Onogurski ostrovi’ \o-no-'gur-ski 'os-tro-vi\) is the group of nine islands and some islets and rocks adjacent to the northwest coast of Robert Island in the South Shetland Islands, Antarctica. The group is situated between Carlota Cove to the southwest and Clothier Harbour to the northeast, and 700 m (770 yd) southeast of Cornwall Island. Kovach Island and Grod Island, the largest two in the group, have a surface area of 11 hectares (27 acres) and 10 hectares (25 acres) respectively. The area was visited by early 19th century sealers based in Clothier Harbour.

The island group is named after the settlement of Onogur in northeastern Bulgaria in connection with the Onogurs (5th-7th century).

Islands in the Onogur group

The group comprises the following islands:

All content from Kiddle encyclopedia articles (including the article images and facts) can be freely used under Attribution-ShareAlike license, unless stated otherwise. Cite this article:
Onogur Islands Facts for Kids. Kiddle Encyclopedia.