The Orocopia Mountains are located in Riverside County in southern California, United States, east of the Coachella Valley, west of the Chuckwalla Mountains, and south of Interstate 10 in the Colorado Desert. The range lies in an east-west direction, and is approximately 18 miles long. The Orocopia Mountains are north of and overlooking the Salton Sea and south of Joshua Tree National Park, with the Chocolate Mountains to the southeast and the scenic Mecca Hills just northwest. 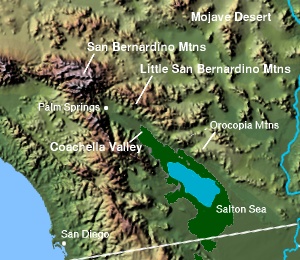 Location of the Orocopia Mountains

The Wilderness Area includes some remnant natural spring fed oasis with the only California native palm, Washingtonia filifera or the California Fan Palm.

The Bradshaw Trail passed through the mountains, the first recorded route to the Colorado River from Riverside, California.

The dramatic and variable terrain was shaped primarily by movements of the adjacent San Andreas Fault over millennia. Most notably, the Orocopia schist, a blueschist assemblage found in the range, matches the Pelona schist found over 250 km away in the San Gabriel Mountains along the San Andreas fault. Hill and Dibblee (1953) first noted this similarity (a piercing point), and used it to construct the first estimates of the offset on the fault.

The Orocopia Mountains offer considerable geologic variety and was one of the areas used for geologic field training by Caltech Professor of Geology, Leon T. Silver, for astronauts in preparation for the NASA Project Apollo Moon landing missions. This training included:

All content from Kiddle encyclopedia articles (including the article images and facts) can be freely used under Attribution-ShareAlike license, unless stated otherwise. Cite this article:
Orocopia Mountains Facts for Kids. Kiddle Encyclopedia.