Painswick is a town and civil parish in Gloucestershire, England. Originally the town grew on the wool trade, but it is now best known for its parish church's yew trees and the local Rococo Garden. The town is mainly constructed of locally quarried Cotswold stone. Many of the buildings feature south-facing attic rooms once used as weavers' workshops.

Painswick stands on a hill in the Stroud district, overlooking one of the Five Valleys. Its narrow streets and traditional architecture make it the epitome of the English village.

There is evidence of settlement in the area as long ago as the Iron Age. This can be seen in the defensive earthworks atop nearby Painswick Beacon, which has wide views across the Severn Vale. The local monastery, Prinknash Abbey, was established in the 11th century. Painswick itself first appears in historical records in the Domesday Book of 1086, as Wiche, 'dairy-farm'. It continues to appear by this name into the thirteenth century. The form Painswik first appears in 1237, but must originate in the name of an earlier lord of the manor, Pain Fitzjohn (d. 1137). Pain was a common Anglo-Norman name (itself originating in paiën, Latin paganus, 'heathen').

During the first English Civil War (1642–45) Gloucester was a Parliamentarian stronghold of some strategic importance. Consequently, it was surrounded by forces loyal to the King. After the siege of Gloucester was broken on 5 September 1643, the Royalist army, which had been surrounding the city, encamped overnight at Painswick, with the King staying at Court House. Some damage was caused by the troops and a scar from two small cannonballs can still be seen on the tower of St. Mary's parish church. 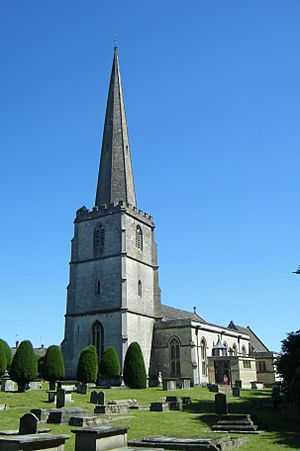 The Church of England parish church of Saint Mary is a Grade I listed building. A priest in Painswick is noted in the Domesday Book and so it is assumed that there was also a church here at that time. Evidence suggests that it was built between 1042 and 1066 by Ernesi, a rich Anglo Saxon thegn who was then Lord of the Manor.

After the Norman conquest the Lordship passed to the family of de Laci, the patron saint of which was Saint Peter. In 1377 the chapel at the north side of the church was rebuilt and dedicated to St. Peter. This is the oldest part of the church. Shortly afterwards the north aisle was added. By this time the de Laci family had given the living to the Prior and Canons of Llanthony Priory who had spiritual oversight of the parish until the Reformation.

The nave and tower were built about 1480 and by 1550 the sanctuary has taken its present form. The spire was not added until 1632. The church remained in this form until the English Civil War when it was occupied by Parliamentarians in 1644. The Royalists recaptured the village, however, after severe fighting. Bullet and cannon shot marks remain on the church tower to this day. The church was greatly damaged by fire.

In 1657 a gallery was added to the north aisle. In 1740 the south aisle was built with a gallery above. A west gallery was added in 1840. In 1877 the church was restored by public subscription. The font dates from 1661 and replaced one destroyed during the civil war. The Royal arms over the entrance door are those of William IV. 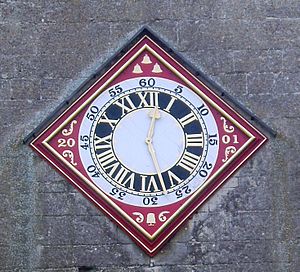 The restored clock-face on the tower of St.Mary's

The imposing tomb was occupied by three different families and suffered in the fire of 1644. The First World War screen was carved by a Belgian refugee and lists all those from Painswick who served and the names of those who died in gold.

The organ was originally built in the 18th century by Sneltzer but only the casing remains. The present instrument was installed by Nicholson of Worcester.

A bell ringers' society was formed in 1686 and the ringers are still known as the "Ancient Society of Painswick Youths". Before 1731 there were eight bells, but the ring was augmented in 1732 and in 1819 by four further bells. In 1986 to celebrate the tercentenary of the society a thirteenth bell was added and the clock face restored. In 1993 the addition of an extra treble bell, made possible by a generous donation, completed the present ring of fourteen bells. 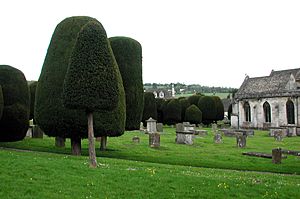 The St Mary's Parish churchyard is notable for its ancient and numerous yew trees. 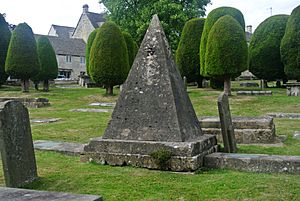 In the churchyard Painswick has a fine collection of chest tombs and monuments from the early 17th century onwards, carved in local stone by local craftsmen. The oldest tomb, with fossils on the top, is of William Loveday, Yeoman, dated 1623. Clifton-Taylor describes the churchyard, with its tombs and yews, as "the grandest churchyard in England".

Other churches and chapels

The Baptist Chapel on New Street was built in 1806 by the Wesleyan Methodists, but was sold to the Baptists in 1831. The premises are now used by an estate agent.

The Chapel of Our Lady and St Teresa on Friday Street opened for Roman Catholic worship on 4 August 1934. The building had previously been a slaughter house. Its original dedication was to St Theresa of Lisieux. On 15 June 1941 it was almost completely destroyed by a German bomb. It was subsequently restored and somewhat enlarged, by Peter Falconer and Partners, and re-opened in 1956. It is still used on every week.

The United Reformed Church in Gloucester Street was built as a Congregational chapel in 1803, was extensively altered in 1892 and was renamed the "Cornelius Winter Memorial Chapel". Winter had been the minister of Christ Church in Painswick from 1788 until 1808 when he died. 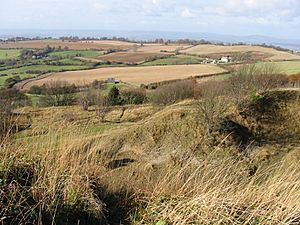 Painswick Beacon, and part of the view from it. The Severn Vale can be seen in the background.

On the first Sunday following the nineteenth of September, there has been an annual festival called "Feast Sunday." Three customs were historically held: feasting, drinking and disorderly conduct; clipping the church; and eating dog pie. The ceremony known as "clipping the church" involves mostly children, but also adults, who join hands, dance around and "embrace" St. Mary's parish church. Clipping the church and eating dog pie are customs that have been revived and are practiced in the present. The dog pie that is eaten is not made of actual dog meat, but the custom is based upon plum pie baked with china dog (dog meat) that had been baked annually between 1870 and 1880.

Folklore holds that the churchyard will never have more than 99 yew trees and that should a 100th grow the Devil would pull it out. According to the V&A a count of the trees showed there to be 103. The plan of the churchyard included in the church's own public leaflet shows 100.

While Royalists were encamped in Painswick, tradition has it that King Charles went up to the Beacon and, seeing the beautiful valley to the east said "This must be Paradise". Since then that valley, and the hamlet on its western side to the north of Painswick have been called Paradise.

During the 18th century a group of gentry, led by Benjamin Hyett, organised an annual procession dedicated to Pan, during which a statue of the deity was held aloft, and people shouted "Highgates! Highgates!". The tradition died out in the 1830s, but was revived in 1885 by the new vicar, W. H. Seddon, who mistakenly believed that the festival had been ancient in origin. Seddon's successor, however, was less appreciative of the pagan festival and put an end to it in 1950, when he had Pan's statue buried, although it was later dug up and placed within the grounds of Painswick House.

According to William Black's 'The Land that Thyme Forgot', Bow Wow Sauce, a sauce to be served with roast meats, was developed in Painswick.

Painswick has one school, Croft Primary School. The school is a small secular and co-educational Community School for children aged 4 to 11 with fewer than 150 pupils. In the Key Stage 2 results for 2008 91% of children achieved or exceeded Level 4 in English and Science and 84% did so in Maths. These results are slightly higher than the county averages of 86%, 82% and 91% in English, Maths and Science respectively.

All content from Kiddle encyclopedia articles (including the article images and facts) can be freely used under Attribution-ShareAlike license, unless stated otherwise. Cite this article:
Painswick Facts for Kids. Kiddle Encyclopedia.