The canyon at the falls is 115 m (377 ft) deep, exposing a large cross-section of the Columbia River Basalt Group. These falls and the canyon downstream are an important feature of the channeled scablands created by the great Missoula floods that swept periodically across eastern Washington and across the Columbia River Plateau during the Pleistocene epoch.

The area is characterized by interconnected and hanging flood-created coulees, cataracts, plunge pools, kolk-created potholes, rock benches, buttes, and pinnacles typical of scablands. Palouse Falls State Park is located at the falls, protecting this part of the uniquely scenic area.

In 1984, the Franklin County Public Utility District proposed a 98-foot-high (30 m) dam be constructed upstream of the falls, allowing for a significant hydraulic head for hydroelectric power generation. This would have provided over one-third of the county's power and would have reduced ratepayer charges substantially. However, the majority of the ratepayers declined to approve the investment, preserving this geologically significant feature. 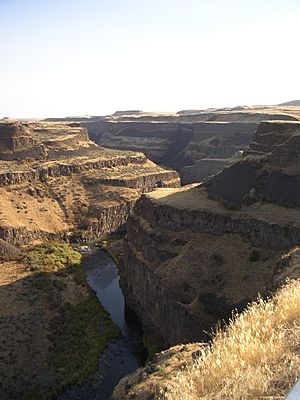 In the Palouse River Canyon just downstream of Palouse Falls, the Sentinel Bluffs flows of the Grand Ronde Formation can be seen on the bottom, covered by the Ginkgo Flow of the Wanapum Basalt.

The falls are included in Washington's Palouse Falls State Park, which provides access to the falls and has displays explaining the region's unique geology, as well as its historical ties (the Palouse Indians and the Mullan Road both took advantage of the easy access to the plateau in the vicinity of the falls). The park provides a viewpoint facing Palouse Falls that is a short walk from the parking area, campground, and picnic area. A larger trail system is being developed by the parks department.

On April 21, 2009, Tyler Bradt ran the falls in a kayak, setting an unofficial world record for the highest waterfall run. Bradt's media agent released the video footage of him dropping over the falls to Sports Illustrated, which carried it on its website. The magazine carried a two-page photo of the feat in its May 18 issue. The photos were also reproduced in Spain's Hola magazine's international issue of September 23, 2009.

Height of the falls

As a result of the unofficial world record for the highest waterfall run, questions were raised about the correct height of the main drop for the falls. In the interest of claiming a world record, Bradt's team measured the falls and determined the height was 186 ft (57 m) from the top pool immediately above the main drop to the plunge pool immediately below. A regional paper, The Spokesman-Review, inquired with Washington state officials and determined that the previous height measurement was performed in 1945 using earlier techniques; the state was not prepared to perform an updated measurement using laser surveying equipment. However, a Whitman College geology professor led a team of students who determined:

On February 12, 2014, the Washington House of Representatives passed HB 2119 unanimously to make Palouse Falls the official state waterfall in Washington. The proposal for the bill originated when a group of elementary school students in the nearby town of Washtucna lobbied the state legislature. 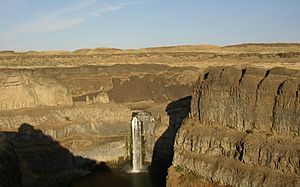 Palouse Falls on the Palouse River.

All content from Kiddle encyclopedia articles (including the article images and facts) can be freely used under Attribution-ShareAlike license, unless stated otherwise. Cite this article:
Palouse Falls Facts for Kids. Kiddle Encyclopedia.