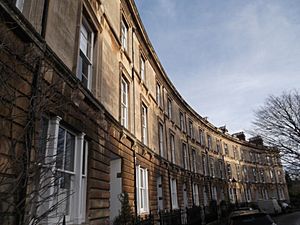 Terraced houses on the north side of the main crescent of Park Town. 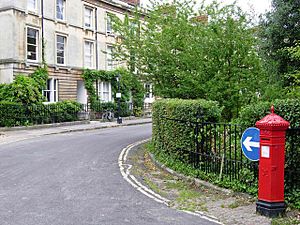 North side of the main Park Town crescent, with a traditional Victorian Penfold-style hexagonal pillar box.

Park Town is a small residential area in central North Oxford, a suburb of Oxford, England. It was one of the earliest planned suburban developments in the area and most of the houses are Grade II listed.

Samuel Lipscomb Seckham (1827–1900) developed the houses in the main crescent in 1853–54, with Bath stone front elevations, and the west-facing crescent with an elevated pavement known as "The Terrace" in 1854–55. The Park Town Estate Company was formed in September 1857 through Seckham's efforts.

Many of the houses and gardens in Park Town were originally surrounded by ornamental iron railings. Many of these were removed for war use in the Second World War.

To the west is Banbury Road with Canterbury Road on the opposite side and to the east is the Dragon School. St Anne's College has student accommodation here.

Parktown and it's distinctive architecture featured in the ITV series Inspector Morse ( episode: The Way Through The Woods ).

Miss Sarah Angelina Acland (1849–1930), daughter of Sir Henry Wentworth Acland, lived for the latter part of her life and died at her home in (then No. 7) Park Town. Her interest in colour photography at the turn of the 20th century produced a number of significant early examples, which are held at the Museum of the History of Science in central Oxford. 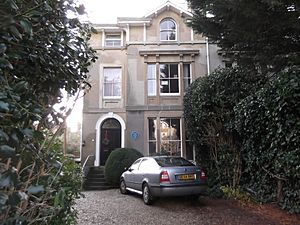 The former residence of William Morfill in Park Town, marked with a blue plaque.

42 Park Town was the home of William Richard Morfill (1834–1909), who was the first Professor of Russian and Slavonic Languages at Oxford University. He is commemorated by a blue plaque on the building that the Oxfordshire Blue Plaques Board installed in 2009.

All content from Kiddle encyclopedia articles (including the article images and facts) can be freely used under Attribution-ShareAlike license, unless stated otherwise. Cite this article:
Park Town, Oxford Facts for Kids. Kiddle Encyclopedia.