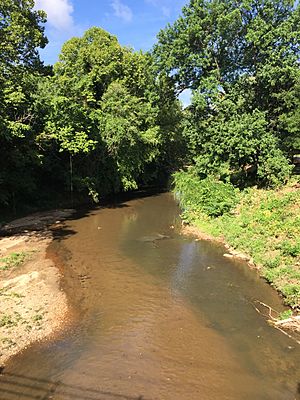 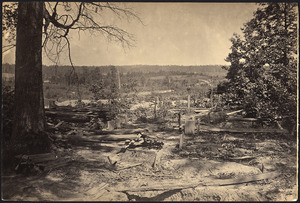 Peachtree Creek is a major stream in Atlanta. It flows for 7.5 miles (12.1 km) almost due west into the Chattahoochee River just south of Vinings.

Peachtree Creek is an important part of the area history. Fort Peachtree was built near the creek and the Chattahoochee River to guard against the Cherokee, who were in the Cherokee County territory northwest of the river. 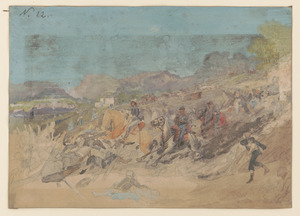 Depiction of the Battle of Peachtree Creek by Adolph Metzner

During the American Civil War, the Battle of Peachtree Creek was a major battle of the Atlanta Campaign. Pace's Ferry was built across the river near the creek, and Paces Ferry Road still runs roughly parallel to the creek. Another street, Peachtree Battle Avenue, runs in a similar fashion. Because it is usually called just Peachtree Battle (even by GDOT on its overpass of Interstate 75), that part of Buckhead is often called the same, which in turn gave rise to a local play called Peachtree Battle.

Its two major tributaries are the North Fork Peachtree Creek and the South Fork Peachtree Creek. The northern fork begins at the edge of Gwinnett County and flows 13.5 miles (21.7 km) southwest, almost perfectly parallel to Interstate 85 through DeKalb County. It ends at its confluence with the southern fork, next to where the highway meets Georgia 400. The southern fork, 15.4 miles (24.8 km) long, begins in Tucker and flows south then west, passing through Clarkston, then crossing under part of the Stone Mountain Freeway and quickly back again, west (inside) of the Perimeter. It then flows twice through the northern part of the campus of Emory University and its Wesley Woods section. The southern edge of its basin borders the Eastern Continental Divide, including Peavine Creek (which ends next to WAGA-TV) and its tributary Lullwater Creek, which originates in the Lake Claire neighborhood of Atlanta and drains Fernbank Forest and the Druid Hills Golf Club north of Ponce de Leon Avenue. Other major nearby creeks in Atlanta include Nancy Creek (which flows into Peachtree Creek just before the Chattahoochee River), and Proctor Creek (which flows directly into the Chattahoochee). 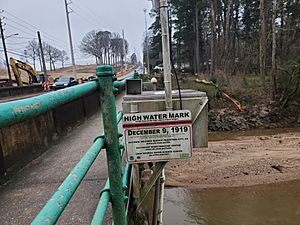 In October 2017, future plans were released for the Peachtree Creek Greenway that will run along Peachtree Creek. Construction on the first section of the Greenway began in late 2018 in Brookhaven. The goal of the greenway is to provide residents with close-to-home and close-to-work access to bicycle and pedestrian trails, serve transportation and recreation needs, and help encourage quality of life and sustainable economic growth. The trail will connect the cities of Atlanta, Brookhaven, Chamblee and Doraville.

All content from Kiddle encyclopedia articles (including the article images and facts) can be freely used under Attribution-ShareAlike license, unless stated otherwise. Cite this article:
Peachtree Creek Facts for Kids. Kiddle Encyclopedia.