Tucker is a city located in DeKalb County, Georgia, located near Atlanta and was originally settled in the 1820s, and later developed as a railroad community in 1892. According to the 2016 United States Census Bureau annual estimate of resident population, it has a population of 35,322. In a November 2015 referendum, by a 3:1 margin (73.94%), voters approved incorporating Tucker into a city. In March 2016, Tucker residents elected the city's first mayor and city council.

The 1821 Georgia Land Lottery opened portions of state land for settlement between the Flint and Ocmulgee rivers, including present-day DeKalb County. The Muscogee (Creek) Nation ceded the land to the United States in January of that year, and drawings for lots measuring 202.5 acres (81.9 ha) each began in May in Milledgeville, the state capital until 1868. The land grant fee was $19.00.

In 1821, the area that would become Tucker was in Militia District 572 in Henry County. The state created DeKalb County on December 9, 1822, and District 572 became DeKalb's 18th District, or the Brownings District, reportedly named for Andrew Browning.

Among the thirty cemeteries within a 4-mile (6 km) radius of Main Street, approximately 30 graves belong to individuals born in the 18th century, four of whom are Revolutionary War soldiers. Twelve graves belong to Confederate soldiers.

In spite of DeKalb County delegates voting against secession from the United States, Georgia joined the Confederacy and seceded from the union in 1861. The full reality of that decision marched into Tucker in July 1864. Union soldiers camped at Henderson's Mill, used the Brownings Court, one of the few buildings in the area they did not burn, dismantled the railroad to Stone Mountain, and formed the left wing of Sherman's advance to Atlanta. 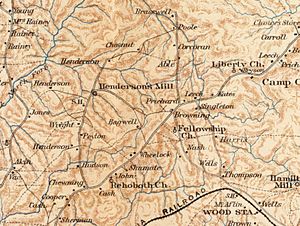 Map of Tucker area during the U.S. Civil War 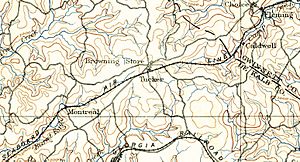 In 1886 the Georgia, Carolina and Northern Railway received a charter to build a new rail line between Monroe, North Carolina, and Atlanta. Prior to the project's completion, the company leased the road to the Seaboard Air Line Railroad system, a collection of regional railroads headquartered in North Carolina eager to extend its reach to Atlanta.

Seaboard built depots at a number of small villages, often little more than a crossroads, and named them for railroad company officials. The depot at Jug Tavern, for example, was named for Seaboard's general manager, John H. Winder. The stop at Bryan was named in honor of the system's general superintendent, Lilburn Meyers. Although the origin of the name is unknown, it is possible that the next stop, in the Brownings District, may have been named for Rufus S. Tucker, a director and major shareholder in several Seaboard system railroads. At the DeKalb County Centennial Celebration in 1922, Charles Murphey Candler stated that Tucker a “prosperous and promising village on the Seaboard Air Line Railway . . . was named in honor of Capt. Tucker, an official of the Seaboard Air Railway.” Some residents attribute the name to a local family with the surname Tucker. 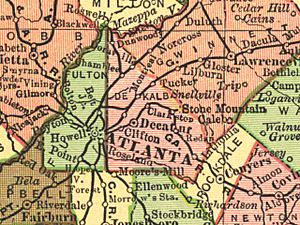 The first train steamed into the new Tucker station on Sunday, April 24, 1892. Originating in Elberton with a final destination of the Atlanta suburb of Inman Park — a four-hour trip — the Seaboard train consisted of two cars carrying 150 passengers and a baggage car. Two months later the US Postal Service appointed Alpheus G. Chewning first Postmaster of the Tucker Post office. Rural Free Delivery began on March 2, 1903.

Tucker, at 1,117 feet (340 m) feet above sea level, is the highest point of elevation on the railroad line between Atlanta and Richmond, Virginia.

Following World War II, Tucker began a steady transition from an agricultural community to a mixed industrial, retail, and residential area. The strength of a county-wide water system extending into Tucker by the 1950s, and the post war establishment of nearby employers in other areas of the county including the CDC in 1947, General Motors in Doraville, Kraft Foods in Decatur, and the growth of Emory University, brought new residents to Tucker from across the nation. Descendants of early settlers subdivided and sold family land for neighborhoods and shopping plazas. Local community leaders opened Tucker Federal Savings and Loan, created a youth football league, and by the 1960s newspapers identified Tucker as “DeKalb’s Area of Golden Opportunity.” The Baby Boom drove the growth of DeKalb County schools and with the affordability of the car, the expansion of the highway system, and inexpensive fuel, Tucker became an ideal location to call home. 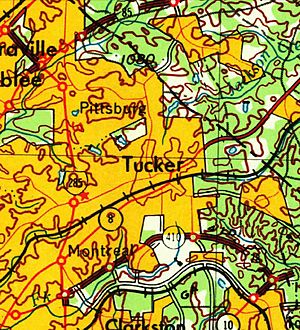 The Eastern Continental Divide cuts through Tucker, along Chamblee-Tucker Road to LaVista Road and continuing south towards Mountain Industrial Boulevard. Water falling to the west of this line flows towards the Chattahoochee River and the Gulf of Mexico. Water falling to the east of this line flows towards the Atlantic Ocean through the Ocmulgee River. 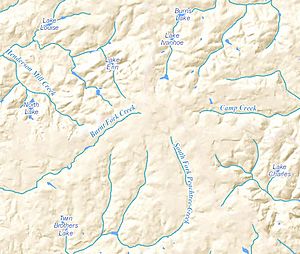 Tucker is in the state's Piedmont geologic region, composed of igneous and metamorphic rocks resulting from 300 to 600 million year old sediments that were subjected to high temperatures and pressures and re-exposed roughly 250 to 300 million years ago. Rocks typical of the region include schist, amphibolite, gneiss, migmatite, and granite.

Over a dozen creeks originate in Tucker including Burnt Fork Creek, South Fork Peachtree Creek, Camp Creek, and Henderson Mill Creek. Prior to the widespread accessibility of electricity and indoor plumbing, several were used as mill ponds or dammed for baptism. From 1906 until its demise in the 1940s, Burnt Fort Creek was the primary tributary for the Decatur Waterworks.

Tucker's climate, typical of a humid subtropical climate, features mild winters and hot summers. In spite of moderate conditions compared to communities many other states, Tucker has occasional extreme weather. The record high is 110 °F (43 °C), recorded on July 8, 1927, and the record low, January 21, 1985, −10 °F (−23 °C). 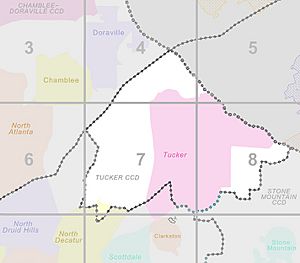 According to the 2010 census, the Tucker Census-designated place (CDP) had a population of 27,581, and the racial and ethnic composition of the CDP was as follows:

Of the 11,894 housing units identified in 2012, the home ownership rate is 70.7% and the median value of owner occupied housing units, $233,700. Multi-unit structures (apartment complexes, condominiums) represent 22% of all housing. 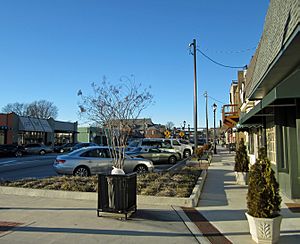 Tucker primarily consists of 1960s and 1970s-era ranch and split-level homes, and 1970s and 1980s-era multi-story homes. The latter two often feature daylight basements. Various neighborhoods are typically groups by geographic association with elementary schools and other centers of community life such as parks.

With the exception of sports organizations, involving residents in multiple counties, most of these groups are predominantly led by and serve residents within the Tucker area.

Outdoor events held on Main Street are a central part of the community for numerous residents and organizations. The Tucker Day celebration, first held in the 1950s, is an annual event typically including a parade, that runs the length of Main Street with food vendors, artist, musicians, and merchants. Other annual events on Main Street include the Taste of Tucker and Tucker Chili Cook-Off. The street is also closed for the Tucker Cruise-In held monthly between April and September. The Farmers Market on Main Street occupies a similar seasonal schedule, though weekly.

The Tucker High School varsity football team, the Tucker Tigers, is a large seasonal draw for former and current Tucker alumni and residents. Like most high schools in DeKalb County, Tucker does not have a local football stadium, thus home games are technically away games. 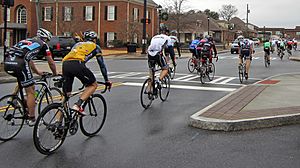 Adult sports include road bicycle racing. The weekly 42-mile (68 km) Tucker Ride and Baby Tucker. According to Southeastern Cycling, "This is where the big boys and racers show up to play." The Tucker ride maintains speeds over 24-mile (39 km) per hour. The Baby Tucker is slightly less strenuous at 20-mile (32 km) per hour. 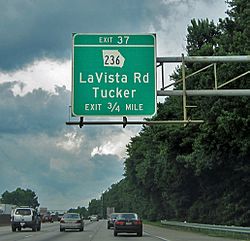 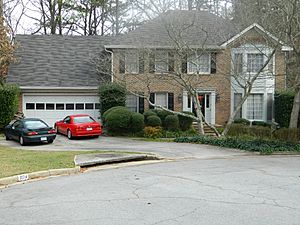 According to data from 2007, the Tucker CDP had 3,709 businesses, and the ethnic composition of the owners was as follows:

In February 2013, DeKalb County Board of Commissioners approved the formation of the Tucker Community Improvement District (CID). In August 2014 the Tucker CID changed its name to Tucker-Northlake CID to reflect expansion into the Northlake business district. Tucker is also home to the Stone Mountain CID along Mountain Industrial Boulevard.

Commercial property owners in both districts vote on a self-imposed millage rate increase and use the funds for community improvements. The tax and millage rate increase applies to commercial property only and not residential. Under Georgia law CID funds may be used for street and road construction and maintenance, parks and recreation area, public transportation, and other services. CID investments are often leveraged through state and local grants increasing return on investment. 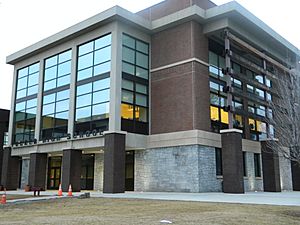 All content from Kiddle encyclopedia articles (including the article images and facts) can be freely used under Attribution-ShareAlike license, unless stated otherwise. Cite this article:
Tucker, Georgia Facts for Kids. Kiddle Encyclopedia.