Pyotr Ilyich Tchaikovsky (Russian: Пётр Ильич Чайкoвский, Pëtr Il’ič Čajkovskij; ) (born Kamsko-Votkinsk, 7 May 1840; died St Petersburg, 6 November 1893; pronounced chai-KOV-skee) was a Russian composer who lived in the Romantic period. He is one of the most popular of all Russian composers. He wrote melodies which were usually dramatic and emotional. He learned a lot from studying the music of Western Europe, but his music also sounds very Russian. His compositions include 11 operas, 3 ballets, orchestral music, chamber music and over 100 songs. His famous ballets (Swan Lake, The Nutcracker and Sleeping Beauty) have some of the best known tunes in all of romantic music. He is widely regarded as the greatest composer of ballets. 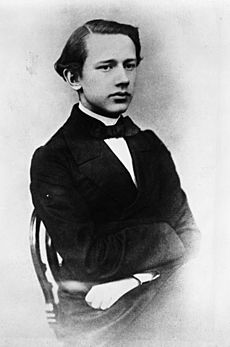 Tchaikovsky as a student at the Moscow Conservatory. Photo, 1863

Tchaikovsky’s father was a Ukrainian who worked as a mining engineer. His mother’s grandfather was a Frenchman who had moved to Russia. She was a nervous woman and Tchaikovsky may have gotten his nervous character from her. Tchaikovsky was only five when he started taking piano lessons. He was soon better than his teacher. The family had an orchestrion (a kind of musical box) which played some tunes from classical music by Mozart, Bellini, Donizetti and Rossini.

In 1848 the family moved to St. Petersburg. Tchaikovsky was unhappy and unsettled as he was often separated from his family who moved several times. In 1854 his mother died. He tried to comfort himself by playing music. He spent nine years at the School of Jurisprudence. When he left school, he had to get a job. For four years he worked as a clerk in the Ministry of Justice. Then the composer and pianist Anton Rubinstein helped him to become a music student at the newly opened conservatory in St. Petersburg. He learned to play the flute and the organ as well as the piano and learning all about composition. In 1866 he moved to Moscow where Nikolai Rubinstein, the brother of Anton, encouraged him to write music with a Russian character. He worked very hard, and was often exhausted, but he managed to finish his First Symphony, which was performed in 1868.

In 1875, Tchaikovsky began making a long tour of Europe. He liked Bizet’s opera Carmen, but Wagner’s operas from the Ring cycle bored him. In 1877 he finished Swan Lake, the first of his three ballets. The audience did not like it at first because the dancers were not very good.

Tchaikovsky was a closeted homosexual. In the summer of 1877 Tchaikovsky decided to marry. His wife was called Antonina Milyukova. The marriage was a disaster. A few weeks after the marriage, he ran away and never lived with her again.

Another woman was to become important in his life, but in a very different way. It was to be a very unusual relationship. Her name was Nadezhda von Meck. She was the wife of a rich man. She loved Tchaikovsky’s music and promised him that she would pay him a lot of money every month so long as he promised her that he would never try to meet her. Tchaikovsky no longer needed to work. He was able to give up his teaching job at the Conservatory. For several years he spent the winters in Europe and the summers in Russia.

Tchaikovsky in Odessa, where he conducted five concerts in January 1893

By 1885, Tchaikovsky had tired of travelling around. He rented a country house in Klin, just outside Moscow. He lived a regular life, reading, walking in the forest, composing during the day and playing music with his friends in the evenings. He started to have more confidence as a conductor and toured Europe twice, conducting in Leipzig, Berlin, Prague, Hamburg, Paris and London. In 1889 he finished his second ballet, The Sleeping Beauty and the next year, while staying in Florence, he wrote his famous opera The Queen of Spades based on a story by Pushkin. Later that year Nadezhda von Meck wrote to him that she had lost nearly all her money and could not continue to support him.

In the spring of 1891 he was invited to conduct in New York where the Carnegie Hall was being opened. He also conducted concerts in Baltimore and Philadelphia. When he returned to Russia he wrote his last ballet The Nutcracker and his Sixth Symphony, known as the “Pathétique”. This work is often considered his best. It was performed in St Petersburg on 16 October 1893. Five days later he suddenly became ill with cholera, a disease many people were catching in the city. Tchaikovsky died four days later.

All content from Kiddle encyclopedia articles (including the article images and facts) can be freely used under Attribution-ShareAlike license, unless stated otherwise. Cite this article:
Pyotr Ilyich Tchaikovsky Facts for Kids. Kiddle Encyclopedia.