Petrolia (formerly, New Jerusalem and Petrolea) is an unincorporated community in Humboldt County, California, 10 miles (16 km) southeast of Cape Mendocino, at an elevation of 121 feet (37 m), within ZIP Code 95558, and area code 707. Petrolia was the site of the first oil well drilled in California.

Petrolia has an estimated population of 300-500 people within a 15-mile radius. It is located in the Mattole Valley, part of the Lost Coast region, one of the largest wilderness areas and the longest stretch of undeveloped coastline in the continental United States. Petrolia's isolation is due to its position on the rocky, treacherous coastline adjacent to the King Range mountains that isolate this area from mainland California and continue to leave the area almost completely undeveloped.

A travel magazine has called this area "too lovely to be believed, perhaps too beautiful to last." It has been recognized as the top "still wild" place in California. The area is the only significant stretch of California without a shoreline highway, and so far has "thus escaped tourism's aggressive paws."

Petrolia has been described as "a river valley town with Norman Rockwell flavor." Petrolia is 5 miles (8.0 km) from the Pacific Ocean, the 25-mile (40 km) section of beach protected by the King Range National Conservation Area and Sinkyone Wilderness State Park, and the Punta Gorda Light. The Mattole River is home to a variety of California wildlife, including river otters, Roosevelt elk, black-tailed deer, steelhead trout, more than 250 bird species, and an threatened salmon that was the subject of a book about the community's attempts over two decades to preserve the Mattole salmon. It is one of the few remaining areas with virgin old-growth stands of Douglas fir. 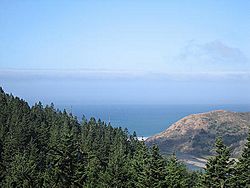 Petrolia is located near the Mendocino Triple Junction, where three fault lines meet, and experiences frequent earthquake activity. The last large earthquake to affect the area was a magnitude 7.1 earthquake in 1992, which resulted in a fire that destroyed the Petrolia General Store. The store was rebuilt in a more modern architectural style than the 100-year-old landmark that it replaced. Two remaining landmarks in Petrolia are a small wooden church and the Petrolia Pioneer Cemetery, which has the graves of original residents of Petrolia dating from November 1857.

On the evening of March 9, 2014 a magnitude 6.9 earthquake struck approximately 50 miles to the west. It was widely felt, yet caused little to no damage, nor generate a tsunami. The lack of any significant damage or land deformation was attributed to the shallow strike-slip fault movement in deep (3000m) water. In 2010 two other large quakes had hit the area, a 6.5 on January 9 and a 5.9 on February 3; neither caused any deaths, but the January quake was reported to have caused $40 million in damage throughout the area.

The weather in Petrolia is temperate and has the Mediterranean climate of much of northern California. The town is located in a banana belt that is sheltered from the fog that reaches Eureka and some of the northern towns, such as Arcata and McKinleyville. south of Petrolia, has a less temperate climate and its summers and winters are more extreme, with one of the highest amounts of winter rainfall.

There are only two roads that lead into Petrolia, one from the north from Ferndale, California and one from the south from Honeydew, California, leading through scenic redwood forests that were the site for the filming of Jurassic Park and After Earth. Both roads are winding, steep, and sometimes unpaved, passing large tracts of scenic overlooks and wilderness areas. They are popular routes for visitors, especially mountain bikers and motorcyclists, and have been described as leading to "an almost comically steep drop to the sea". The road from Petrolia to Ferndale follows the ocean and has unbroken vistas of rocky ocean coastline and beach. Petrolia is surrounded by large tracts of original homestead ranches and farms.

The Mattole area is popular with visitors, particularly the Lost Coast beaches, which feature tide pools, pristine beaches and relatively deserted hiking trails. At certain times of year, migrating gray whales can be seen from shore, as well as colonies of harbor seals and sea lions. Local residents use the Mattole River for swimming, rafting, canoeing, kayaking and catch and release fly fishing. The South Cape Mendocino State Marine Reserve and Sugarloaf Mountain are immediately offshore and are closed to public access.

The area was originally settled by the Mattole or Pacific Coast Athapaskan Indians, who arrived at the Pacific Coast late in the first millennium from what is now Canada.

With the appearance of Western settlers in 1849, including gold rush settlers and miners, the Mattole culture quickly died out. The last remaining descendants of the Mattole live today in Bear River on the Rohnerville Rancheria, but there are no remaining native speakers of the Mattole language. There are estimated to be more than 80 archeological sites of significance in the Lost Coast area. 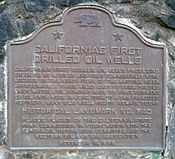 The white settlers originally called the place New Jerusalem; when the first oil was pumped in 1865, it was renamed Petrolia. It was the site of the first oil well drilled in California. The oil was very fine and ultimately dried up; the site is now registered as California Historical Landmark #543.

Petrolia has a small downtown area with a local general store with delicatessen, groceries and rental movies. It has a post office, a single pump gas station and volunteer fire department. The original bell cast in 1871 for the Mattole School is now at the Mattole Elementary School.

There are two community centers, the Mattole Valley Community Center, originally a structure from 1862 located near the downtown, that hosts community cabaret and gatherings, and the Mattole Grange, an indoor and outdoor gathering area approximately five miles south of Petrolia that hosts a monthly pancake breakfast and farmers' market. There are community gardens, various community clubs, and a medical clinic.

Local businesses include a restaurant, a bed and breakfast, a gourmet coffee company that imports and roasts coffee in a converted barn on a hillside overlooking the ocean, an organic vineyard and winery that fertilizes with organic dairy manure from Ferndale, California, and an organic pick-it-yourself blueberry farm.

A few miles outside town at the former Walker ranch is a 400 feet (120 m) by 20 feet (6.1 m) underground steel and concrete vault, built by the Church of Spiritual Technology to hold "the wisdom of the ages." The Church owns over 3,600 acres (1,500 ha; 5.6 sq mi) of land and the facility also includes a large caretaker's house and a guard house. The vault is one of several across the U.S. and is similar to Trementina Base. Prior to construction of this vault, on June 12, 1986, the oldest house in the Petrolia area was deliberately burned by the Church of Spiritual Technology to clear the way for their construction, and symbols were cut in the ground above the vault to mark its location.

A number of writers and artists have made their home in Petrolia, including Alexander Cockburn, a left-wing journalist and founder of CounterPunch, Dale Maharidge, a journalist and winner of the Pulitzer Prize, Freeman House, an environmental author, Peter Hannaford, an author and political public relations specialist, Jim Danisch, a potter and sculptor, and Jenny Scheinman, renowned violinist.

The Mattole Valley Historical Society holds quarterly meetings in Petrolia and conducts community walking tours, slideshows and talks about the history of the area and its founders.

Community events including all ages sporting events, town wide talent shows, pancake breakfasts, and community meet-ups. In July of each year, the area hosts a music festival called "Roll on the Mattole", at the Mattole Grange, sponsored by the Honeydew Firefighters. Twice a year, barbecues at the Mattole Grange attract families from all over the area. The July 4th annual barbecue features an enormous barbecue pit of local beef and baked beans cooked in a vintage pot so large that they must be stirred with a canoe paddle. There are horse races in September, cycling tours in May–September, including a cycling/hiking tour of the Redwoods and the Tour of the Unknown Coast. A race called the "Rye and Tide" combines bicycling and running from downtown Petrolia along Lighthouse Road 7 miles (11 km) to the ocean. Besides the one restaurant located in town, the closest other amenities, are located in Ferndale, approximately 33 miles (53 km), a trip of over an hour by car.

All content from Kiddle encyclopedia articles (including the article images and facts) can be freely used under Attribution-ShareAlike license, unless stated otherwise. Cite this article:
Petrolia, California Facts for Kids. Kiddle Encyclopedia.