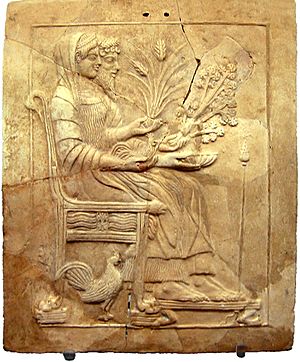 A pinax (plural: pinakes) was a tablet or board In ancient Greece and Rome.

It was used for writing, or for other purposes. These tablets were usually made of wood, terracotta, marble or bronze. Painted pinakes were given to the gods, or fixed on tombs. In common usage, a pinax was a wax-covered writing tablet. They were used from the 8th to the 6th century BC.

In Book 10 of his work De Architectura, Vitruvius describes a hydraulic organ, in Chapter 8, section 3, he writes: "In each channel are fixed stops, that are connected with iron finger-boards; on pressing down which, the communication between the chest and the channels is opened. Along the channels is a range of holes corresponding with others on an upper table, called πίναξ (pinax) in Greek".

All content from Kiddle encyclopedia articles (including the article images and facts) can be freely used under Attribution-ShareAlike license, unless stated otherwise. Cite this article:
Pinax Facts for Kids. Kiddle Encyclopedia.