Ponte Capriasca is a municipality in the district of Lugano in the canton of Ticino in Switzerland. 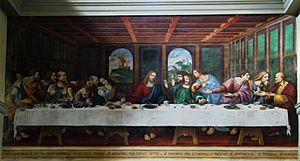 The Last Supper by Cesare da Sesto (a pupil of Leonardo da Vinci) in the Church of S. Ambrogio

Ponte Capriasca is first mentioned in 1335 as Ponte. In 1491 it was mentioned as Ponte Criviascha.

Historically, it was part of bailiwick of Lugano. Under the rule of the Duchy of Milan as well as the Swiss Confederation, the village was an independent municipality with its own statutes and rights. The rights and statutes were first documented in 1443 and were confirmed in 1648. Early in the 16th Century, the village was involved in the fierce fighting between the Guelphs and Ghibellines.

In 1455, it separated from the Tesserete parish to form an independent parish. The parish church of S. Ambrogio is first mentioned in 1356 but is built on a Roman era foundation. Its present form dates from a rebuilding of 1835, in which the old bell tower and the nave were incorporated. The Last Supper in the interior dates from the 16th Century and was modeled on Leonardo da Vinci's Last Supper. The painting was restored in 1951 and again in 1989-92.

The local economy of the village was based on agriculture and the income from the seasonal migration, especially to northern Italy. From the 1970s the village experienced a building boom and its population increased fivefold. In 2005 slightly over half of the jobs are in the service sector and over three-quarters of the population are commuters.

Of the built up area, housing and buildings made up 6.3% and transportation infrastructure made up 1.6%. Out of the forested land, 44.5% of the total land area is heavily forested, while 17.3% is covered in small trees and shrubbery and 2.3% is covered with orchards or small clusters of trees. Of the agricultural land, 1.8% is used for growing crops and 6.3% is used for alpine pastures. All the water in the municipality is flowing water. Of the unproductive areas, 11.0% is unproductive vegetation and 2.1% is too rocky for vegetation.

The municipality is located in the Lugano district, in the Valli di Lugano Region.

All content from Kiddle encyclopedia articles (including the article images and facts) can be freely used under Attribution-ShareAlike license, unless stated otherwise. Cite this article:
Ponte Capriasca Facts for Kids. Kiddle Encyclopedia.