Poquoson, informally known as Bull Island, is an independent city in the Commonwealth of Virginia. As of the 2020 census, the population was 12,460. The Bureau of Economic Analysis combines the city of Poquoson with surrounding York County for statistical purposes.

Poquoson is located on the Virginia Peninsula, in the Hampton Roads metropolitan area.

Poquoson, which was formerly part of York County, became an incorporated town in 1952 and an independent city in 1975. (In Virginia, municipalities incorporated as independent cities are not part of any county.) However, the ties remain close. Over 30 years after Poquoson became a politically independent entity, some constitutional services such as the courts, sheriff and jail continue to be shared with neighboring York County.

Poquoson is one of the oldest continuously named cities in Virginia. It is also one of the few to retain a name which derived from the Native Americans who inhabited the area before colonization by the English began in the 17th century.

The name of the city is a Native American word which roughly translates to "great marsh." The term pocosin, with its varied spellings, was a term used by the area's inhabitants to describe a low, marshy, woody place covered by water in the winter, but dry in the summer. These Native Americans were Algonquians, a tribal group affiliated through the Powhatan Confederacy, and were hostile to the early settlers. A petition to have the name of the parish and river changed was an attempt to rid the language of all vestiges of Indian terms. However, "poquoson" has survived through the centuries and has become a proper noun used to designate the present city.

The current city is a remnant of a larger area known from the first days of its settlement in the early 17th century by English colonists as the New Poquoson Parish of the Church of England. In the colonial times before separation of church and state and freedom of religion were established in Virginia and the United States, the church parish boundaries and governmental ones were often the same. In addition to the current city of Poquoson, New Poquoson Parish originally included the areas in York County known today as Poquoson, Tabb, Grafton, Dare and Seaford. This land was opened for settlement in the year 1628 and was occupied by people from the English settlement of the Virginia Colony established at Kecoughtan in 1610 by Sir Thomas Gates which eventually became part of the current City of Hampton. The first reference to Poquoson is believed to be in Colonial records of a land grant of 500 acres (200 ha) in New Poquoson to Christopher Calthorpe in 1631 by a court in what became the former Elizabeth City County.

In 1634, the eight original shires of Virginia were created. Poquoson was located in Charles River Shire. The name was changed to York County in 1642-43. The York River was known earlier as the Charles River, and its name was also changed about the same time.

Poquoson grew as a close-knit rural community of York County for the next 300 years. During the American Revolutionary War, independence was won at nearby Yorktown, a major tourist attraction of the Historic Triangle of Colonial Virginia.

Poquoson became an incorporated town in 1952, as the citizens of the community wanted to keep their own high school open instead of having their children to be bussed to the New York High School due to distance. When the town was incorporated, Poquoson's small predominately African American community known as Cary's Chapel was given the choice to become a part of Poquoson or remain with York County. The Cary's Chapel community chose to remain just outside the town limits in York County. The town became an independent city in 1975 in order to maintain this status. The change from incorporated town to independent city status also effectively protected Poquoson from potential annexation suits by the adjacent City of Hampton.

The changes to incorporated town and independent city were part of a wave of municipal changes in southeastern Virginia in the third quarter of the 20th century. Although Poquoson is one of the smaller of 10 independent cities extant in the Hampton Roads region in the 21st century, it is not unique in the area as a city having large areas of undeveloped and protected wetlands.

The city is a peninsula containing twenty square miles and is located between the Poquoson River on the north, Back River and Wythe Creek (the Old Poquoson River) on the south, the Chesapeake Bay on the east, and York County on the west. The city also shares a border with the City of Hampton and a water boundary across Chesapeake Bay with Northampton County.

Poquoson's mild four season climate means outdoor activities can be enjoyed year round. The weather in Poquoson is temperate and seasonal. Summers are hot and humid with cool evenings. The mean annual temperature is 60 °F (16 °C), with an average annual snowfall of 6 inches (15 cm) and an average annual rainfall of 47 inches (1,200 mm). No measurable snow fell in 1999. The wettest seasons are the spring and summer, although rainfall is fairly constant all year round. The highest recorded temperature was 105 °F (41 °C) in 1980. The lowest recorded temperature was −3 °F (−19 °C) on January 21, 1985.

Additionally, the geographic location of the city, with respect to the principal storm tracks, is generally favorable, as it is south of the usual path of storms originating in the higher latitudes, and north of the usual tracks of hurricanes and other major tropical storms. However, when in the path of a storm the City of Poquoson is subject to severe flooding due to its very low elevation above sea level. Poquoson was significantly impacted by the most destructive storm of 2003, Hurricane Isabel, which caused the worst flooding the Hampton Roads area had seen in over 70 years. During Hurricane Isabel most of the city was under several feet of water due to the storm surge. Six years later the November 2009 Mid-Atlantic nor'easter again flooded much of the city. A mandatory evacuation order was issued during Hurricane Irene in 2011 which also caused significant flooding in Poquoson. As a result of these floods many homes in Poquoson have been elevated on raised foundations. 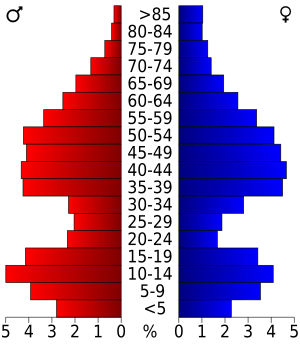 There were 4,166 households, out of which 39.1% had children under the age of 18 living with them, 69.4% were married couples living together, 8.4% had a female householder with no husband present, and 19.1% were non-families. 15.9% of all households were made up of individuals, and 7.1% had someone living alone who was 65 years of age or older. The average household size was 2.75 and the average family size was 3.08. 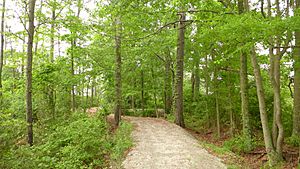 Prior to the World War II and Cold War era expansions of nearby military bases and defense industries that rapidly turned the area into a bedroom community, Poquoson was a sleepy rural area with many small family farms, commercial wharves, seafood packing houses, and boat yards that built and repaired log canoes, oyster buy-boats, and Chesapeake Bay deadrise work boats used by the local waterman. The annual Poquoson Seafood Festival which celebrates Poquoson's heritage is the biggest event in Poquoson. Events at the Friday - Sunday festival include work boat races, singers/bands, vendors, food, crafts, children's entertainment, carnival rides, and sometimes even fireworks.

The Poquoson Museum, founded in 2003, is located on a 16-acre parcel that contains a circa 1900 farm house, agricultural out buildings, frontage along the marshes of Topping Creek and a country store known as ‘Miss Becky’s Store’ that served local residents for many years. In April 2013 the museum completed work on a marsh walk that incorporates 750 feet of raised platforms with signs highlighting different native wildlife and plant life.

The city is served by Poquoson City Public Schools. There are 4 public schools in Poquoson. There is the Poquoson Primary School for Kindergarten, and 1st and 2nd grades. Poquoson Elementary School serves the 3rd, 4th, and 5th grades. Poquoson Middle School offers 6th, 7th, and 8th grade classes. Poquoson High School has grades 9-12. Poquoson's mascot is the Bull Islander in reference to city folklore, which is often shortened to "bull" or "islander" for simplicity.

There are no private schools or colleges in Poquoson and York County. However, there are institutions of each type close by on the Virginia Peninsula. Some of the private schools include Hampton Roads Academy, Our Lady of Mt. Carmel Catholic School, Peninsula Catholic High School, and Denbigh Baptist Christian School, all in Newport News.

Norfolk International Airport (IATA: ORF, ICAO: KORF, FAA LID: ORF), serves the region. The airport is located near Chesapeake Bay, along the city limits of Norfolk and Virginia Beach. Seven airlines provide nonstop services to twenty five destinations. ORF had 3,703,664 passengers take off or land at its facility and 68,778,934 pounds of cargo were processed through its facilities. The Williamsburg-Jamestown Airport provides general aviation services and is located in Williamsburg.

Amtrak serves nearby Newport News, Virginia and Williamsburg, Virginia with three trains a day. The line runs west along the Virginia Peninsula to Richmond and points beyond. Connecting buses are available to Norfolk and Virginia Beach. A high-speed rail connection at Richmond to both the Northeast Corridor and the Southeast High Speed Rail Corridor are also under study. Poquoson is served by two state highways:

The Newport News Waterworks was begun as a project of Collis P. Huntington as part of the development of the lower peninsula with the Chesapeake and Ohio Railway, the coal piers on the harbor of Hampton Roads, and massive shipyard which were the major sources of industrial growth which helped found Newport News as a new independent city in 1896. It includes reservoirs at Skiffe's Creek and another near Walker's Dam on the Chickahominy River. A regional water provider, in modern times it is owned and operated by the City of Newport News, and serves over 400,000 people in the cities of Hampton, Newport News, Poquoson, and portions of York County and James City County.

Poquoson has access to four area hospitals, served by Riverside Medical Center and Bon Secours Mary Immaculate Hospital in Newport News and the Sentara Careplex and the V.A. Medical Center in Hampton.

All content from Kiddle encyclopedia articles (including the article images and facts) can be freely used under Attribution-ShareAlike license, unless stated otherwise. Cite this article:
Poquoson, Virginia Facts for Kids. Kiddle Encyclopedia.