Portstewart is a small town in County Londonderry, Northern Ireland. It had a population of 7,803 people in the 2001 Census. It is a seaside resort neighbouring Portrush. Its harbour and scenic coastal paths form an Atlantic promenade leading to 2 miles of golden strand (Portstewart Strand). Portstewart is probably best known for this sandy beach, popular with surfers.

Portstewart was a popular holiday destination for Victorian middle-class families. Its long, crescent-shaped seafront promenade is sheltered by rocky headlands. It is a reasonably prosperous town. Most of the town is contained in the Strand electoral ward and this is one of the most affluent areas in Northern Ireland. In a deprivation index of electoral wards in Northern Ireland the Strand Ward in the town was ranked 570th out of the 582 wards.

House prices in Portstewart have been amongst the highest in Northern Ireland. According to the University of Ulster Quarterly House Price Index report produced in partnership with Bank of Ireland and the Northern Ireland Housing Executive in Q4 2010, the North Coast region (Coleraine/Limavady area) had higher property prices than those of affluent south Belfast.

Due to unusually high second home ownership there has been concern in recent years about the pace of development in the town. The number of holiday houses or apartments being purchased has led to rapid inflation of house prices. The town has also houses many of the students from the nearby Coleraine Campus of the University of Ulster and has a vibrant social and cultural life.

Portstewart is one of the most integrated towns in Northern Ireland with the religious demographics similar to the population of Northern Ireland as a whole. Community relations are generally good within the town. Dominican College, a Catholic grammar school, has a significant proportion of Protestant students and staff. 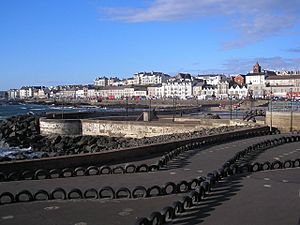 Portstewart was founded in 1792 by John Cromie, who named it after his maternal ancestors, the Stewarts of Ballylesse. A Lieutenant Stewart is said to have obtained a lease of land from the Earl of Antrim in 1734. Prior to this the area was formerly called in Irish: Port na Binne Uaine, a name related to the nearby island and townland of Benoney (an anglicisation of Binne Uaine). The name Port na Binne Uaine is still used today alongside the Gaelicised version Port Stíobhaird.

As recently as the mid 18th century Portstewart was little more than a fishing village, although it has been inhabited since the Neolithic era. Portstewart developed to a modest size seaside resort in the mid 19th century under the influence of a local landlord, John Cromie. Its development and character was influenced greatly by the Sabbatarian sensitivities of the Cromies and the consequent resistance to a railway connection in the mid 19th century. The scale of development for the next century was more modest than that of neighbouring Portrush which rapidly expanded (particularly in the late Victorian era) with the mass tourism market. Despite a tram connection being provided from Portstewart to Cromore to link with the railway, the town developed with a more genteel character. With the ascent of the car as the predominant means of travel through the 20th century, Portstewart developed a wider role as a popular holiday and recreational destination, along with a significant dormitory function due to its proximity to Coleraine as well as being a local service centre.

From the 1950s until into the 1980s the town's main development thrust was as a residential area, with the steady construction of new dwellings in the suburbs mainly for owner occupation. Unlike Portrush where there was a rapid expansion of static caravan parks, Portstewart continued to avoid the effects of mass tourism.

Over the past 15 years however, there has been a widespread perception that the character of the town has changed through the rapid growth of the student population and the accelerating expansion of second home ownership.

The eastern end of the Promenade has a small harbour which has recently undergone refurbishment. 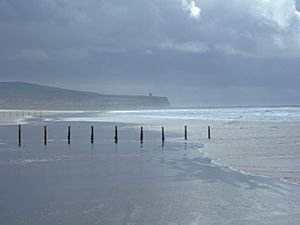 The Strand, looking west to the Barmouth and Mussenden Temple beyond.

All content from Kiddle encyclopedia articles (including the article images and facts) can be freely used under Attribution-ShareAlike license, unless stated otherwise. Cite this article:
Portstewart Facts for Kids. Kiddle Encyclopedia.