This was the first Power Ranger movie since 1997. The movie has many of the characters from the TV show Mighty Morphin Power Rangers but with new actors. The maker of the TV show, Haim Saban, helped to make the movie. The movie was released in the United States on March 24, 2017.

Five young people with attitude are put together to become a new version of a group of goodies called the Power Rangers. The Earth must be protected by them from Rita Repulsa, a powerful witch. Rita is attacking to get the Zeo Crystal She has an army of stone monsters called Putties and a giant golden monster called Goldar. 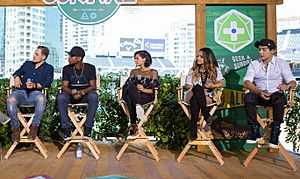 Goldar and the Putty Patrol will be in the movie too.

All content from Kiddle encyclopedia articles (including the article images and facts) can be freely used under Attribution-ShareAlike license, unless stated otherwise. Cite this article:
Power Rangers (movie) Facts for Kids. Kiddle Encyclopedia.