Princess Eugenie of York ( yoo-ZHEN-ee; Eugenie Victoria Helena; born 23 March 1990) is a member of the British royal family. She is the younger daughter of Prince Andrew, Duke of York, and Sarah, Duchess of York. She is ninth in line of succession to the British throne, after her elder sister, Princess Beatrice of York.

Princess Eugenie was born in London at The Portland Hospital for Women and Children on 23 March 1990, the second child of Prince Andrew, Duke of York, and Sarah, Duchess of York, and sixth grandchild of Queen Elizabeth II and Prince Philip, Duke of Edinburgh. On 30 March, the seventh day after her birth, it was announced that the Duke and Duchess of York had named her Eugenie Victoria Helena.

She was baptised at St. Mary Magdalene Church, Sandringham, by the Bishop of Norwich, on 23 December 1990. She was the first royal baby to have a public christening, and the only one of the Queen's grandchildren not to be baptised in the Lily font. Her godparents were James Ogilvy (her father's second cousin), Captain Alastair Ross (who was unable to attend), Susan Ferguson (her maternal grandfather's second wife), Julia Dodd-Noble, and Louise Blacker. She was named after Victoria Eugenie of Battenberg and after Princess Helena, Queen Victoria's granddaughter and daughter respectively.

Eugenie's parents divorced when she was six years old. When she was not at school, she spent her time with her family, as the divorce had been amicable. The Duke and Duchess of York had agreed to joint custody of the girls. Eugenie and her sister frequently travel abroad with one or both of their parents. In the April 2008 issue of Tatler, Eugenie described her grandmother as "one of the most amazing women ever," and her parents as "the best divorced couple" she knew.

In October 2002, the 12-year-old Eugenie underwent back surgery at the Royal National Orthopaedic Hospital in London to correct scoliosis; she still has the two titanium rods in her back that were put in place then. She made a full recovery and is not expected to undergo any further surgery for the condition.

Eugenie began her schooling at Winkfield Montessori from 1992 to 1993. From there she joined her sister at Upton House School in Windsor until 1995. She attended Coworth Park School from 1995 to 2001, and then St George's School, near Windsor Castle until 2003. For the next five years, Eugenie boarded at Marlborough College in Wiltshire. She undertook a gap year before continuing her education in 2009. Eugenie began studying at Newcastle University in September 2009, combining Art History, English Literature and Politics. She completed her studies in 2012, earning a 2:1 in English literature and history of art.

In 2013, she moved to New York City for one year to work for the online auction firm Paddle8 as a benefit auctions manager.

In July 2015, she moved back to London to work for the Hauser & Wirth art gallery as an associate director. 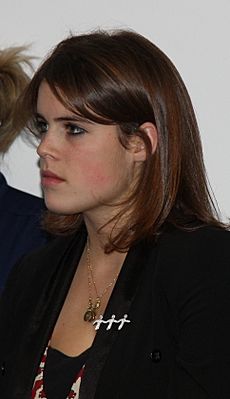 Princess Eugenie does not carry out public duties and receives no allowance from the Privy Purse. She has undertaken limited public engagements, such as those connected with charities her mother supports, including the Teenage Cancer Trust and Children in Crisis.

Eugenie and her sister represented their father at a service of thanksgiving for her aunt, Diana, Princess of Wales, in 2007. In 2008, she opened a Teenage Cancer Trust's unit for young cancer patients in Leeds.

On 2 June 2011, Eugenie visited the Royal National Orthopaedic Hospital (RNOH) with her father as one of her first official engagements. In April 2012 she agreed to be patron for the Hospital's Redevelopment Appeal; this was her first patronage. In 2014, Eugenie re-opened the children's unit at the Royal National Orthopaedic Hospital. In 2014, Eugenie partnered with Daisy London Jewellery to create a limited edition charity bracelet to benefit the RNOH's Appeal. In 2017, the Princess joined her mother to mark the second anniversary of the Teenage Cancer Trust unit at Alder Hey Children's Hospital.

In January 2013, Eugenie with her sister Princess Beatrice visited Berlin and Hanover in Germany to undertake a series of engagements. These included representing the Queen at the reopening of the former Hanoverian royal palace, the Schloss Herrenhausen, which was bombed by the Royal Air Force during the Second World War.

Princess Eugenie and her sister, Princess Beatrice, became Patrons of the Teenage Cancer Trust in June 2016. She is also Patron of the Coronet Theatre, the European School of Osteopathy and, alongside her mother, the Elephant Family, of which her uncle and aunt, the Prince of Wales and the Duchess of Cornwall, are joint presidents. 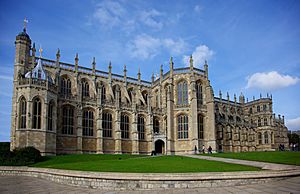 The Duke of York's Office at Buckingham Palace announced the engagement of Princess Eugenie and Jack Brooksbank on 22 January 2018. The couple had been dating for seven years, and were first introduced by friends in a ski break in Verbier, Switzerland, where Brooksbank was working. They were engaged on vacation in Nicaragua. In April 2018, the couple moved from St James's Palace and took up residence in Ivy Cottage at Kensington Palace. The wedding took place at St George's Chapel, Windsor Castle, on 12 October 2018. The wedding dress was designed by the British fashion designers Peter Pilotto and Christopher de Vos of British-based label Peter Pilotto, and was designed to display her surgical scar.

On 25 September 2020, Buckingham Palace announced that the couple were expecting their first child, due in early 2021.

In November and December 2020, it was reported that Eugenie and Brooksbank had moved in and out of Frogmore Cottage at Home Park, Windsor after six weeks' stay.

Princess Eugenie gave birth to a son on 9 February 2021 at the Portland Hospital in London. At birth, he was eleventh in line to the throne.

All content from Kiddle encyclopedia articles (including the article images and facts) can be freely used under Attribution-ShareAlike license, unless stated otherwise. Cite this article:
Princess Eugenie of York Facts for Kids. Kiddle Encyclopedia.