Pulborough is a large village and civil parish in the Horsham district of West Sussex, England, with some 5,000 inhabitants. It is located almost centrally within West Sussex and is 50 miles (80 km) south west of London. It is at the junction of the north-south A29 and the east-west (A283) roads.

The village is near the confluence of the River Arun and the River Rother. It looks southwards over the broad flood plain of the tidal Arun to a backdrop of the South Downs. It is on the northern boundary of the newly established South Downs National Park. 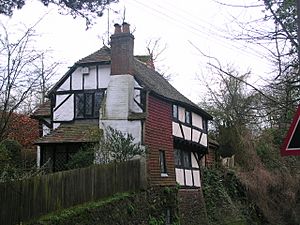 Historically, it was a fording place over the River Arun used by the Romans, who had a mansio across the river at Hardham, one day's march from Chichester on the London road, Stane Street. The Saxons bridged the River Arun here and at nearby Stopham, north of its confluence with the River Rother. It became an important watering and overnight halt for cattle drovers providing easy access to water.

A mile to the west in woodland are the earthwork remains of a motte and bailey castle known as Park Mound, dating from the 11th century.

Transport connections afforded by the River Arun, its navigation, and later by the LBSCR Arun Valley Line brought Pulborough into the industrial age. Good road connections permitted, in the 20th century, the development of manufacturing industry, notably heavy engineering in London Road. This has long since closed down and the site now supports, among other things, a supermarket and a health centre.

Pulborough is also home to the South Downs Light Railway with its steam and diesel trains running regularly throughout the summer, and a more limited service through the colder months.

Pulborough has an angling club, which has a number of initiatives to support local youngsters, including angling training as well as offering talks to local clubs, youth and conservation groups on the merits of angling and what anglers do to support, maintain and improve the habitat in conjunction with government departments and other groups.

Earliest records suggest cricket has been played in Pulborough since 1799. Now based at the Recreation Ground, Pulborough Cricket Club boasts numerous Senior and Junior (Colts) teams. Previously a member club of the Sussex Invitation League, Pulborough's 1st and 2nd Elevens were invited to join the Sussex Cricket League ("the county league") from the 2004 season. A 3rd League XI plays in the West Sussex League, home matches being played nearby at Watersfield. Pulborough was a founder member of the North West Sussex Colts Cricket League (now known as the iDentilam League) in 1987, when it became apparent that schools were not providing adequate cricketing opportunities to local youth. Various age-groups (Under 9s, 10s, 12s, 14s and 16s) now provide ample opportunity to develop cricket skills, played in a competitive environment and ultimately secure the long-term future of the club. The club also provides a mechanism for younger players to progress into senior cricket, with two non-league senior teams playing matches on Sunday afternoons. In 2006, the Sussex Cricket Board recognised the club's efforts towards youth sport, and awarded it ECB 'Focus Club' status. In 2008, the Club launches a junior girls team, thereby continuing the club's ongoing progressive and ambitious plans.

All content from Kiddle encyclopedia articles (including the article images and facts) can be freely used under Attribution-ShareAlike license, unless stated otherwise. Cite this article:
Pulborough Facts for Kids. Kiddle Encyclopedia.