The observatory is primarily used to teach undergraduate astronomy labs, although some research relating to cataclysmic variables and asteroid occultations also takes place.

There are one telescope dome and one roll-off shed on the premises, both housing telescopes. RIT owns a 12" Meade telescope, a 16" telescope, and several smaller refracting telescopes. In addition, a two-element radio interferometer based on the SIMPLE design is being constructed and will be used as a teaching instrument to expose students in astronomy labs to observations at other wavelengths. 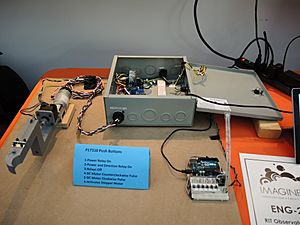 All content from Kiddle encyclopedia articles (including the article images and facts) can be freely used under Attribution-ShareAlike license, unless stated otherwise. Cite this article:
RIT Observatory Facts for Kids. Kiddle Encyclopedia.