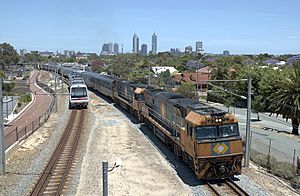 Freight rail was privatised in 2000, with the interstate standard gauge line east from Kalgoorlie owned by the Australian Rail Track Corporation, with the remainder of lines in the state owned by Brookfield Rail. Intrastate freight is mainly operated by Aurizon, while interstate traffic is operated by Aurizon, Pacific National and Specialised Container Transport. A number of private iron ore haulage railways also operate in the Pilbara region of the state. 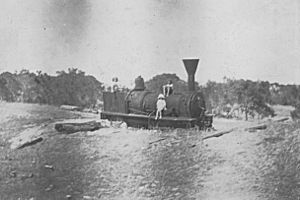 The locomotive "Ballarat" in the sand at Wonnerup, 1921. Reputed to be the oldest in Western Australia, the engine now sits in St Marys Park, Busselton. 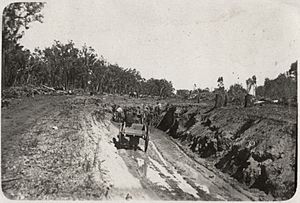 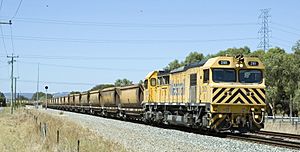 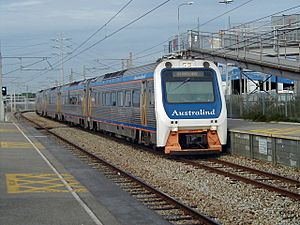 The Western Australian lines developed in narrow 3 ft 6 in (1,067 mm) gauge from Fremantle (the port of Perth), Geraldton, Bunbury, Albany and Esperance, mainly for carrying grain and minerals, with the private Midland Railway Company and Great Southern Railway adding 3 ft 6 in (1,067 mm) gauge lines in the Wheatbelt with the support of land grants.

In 1907 the standard-gauge Trans-Australian Railway from Port Augusta, South Australia to Kalgoorlie was authorised. Construction started in 1912, and it was completed in 1917. It was run by the Commonwealth Railways. In the 20th century standard (1,435 mm (4 ft 8+1⁄2 in)) gauge lines penetrated to Perth and Esperance and long distance heavy-haul railways were built in the Pilbara region by major iron mining companies, particularly BHP Billiton and Hamersley Iron. The Perth suburban lines were electrified and extended.

Government railways were controlled by the Department of Works and Railways from 1877.

Private railways for carrying timber were built south of Perth from Lockville to Yoganup in 1871 (see Busselton) and from Rockingham to Jarrahdale soon after.

The first government railway in the State was a 3 ft 6 in (1,067 mm) gauge line between Geraldton and Northampton and was opened in 1879 to transport lead and copper to port. It was closed in 1957.

The Western Australian Government Railways (WAGR) opened a line from Fremantle to Perth and Guildford in 1881. It was extended to Chidlow in 1884, York in 1885 and Beverley in 1886. Branch lines were built to Belmont, Northam and Toodyay by 1888.

The Beverley line was extended to Albany in 1889 by the Great Southern Railway, which was taken over by WAGR in 1896. A line was built from Perth to Bunbury in 1893, with branches to Collie, Busselton and Bridgetown.

The Midland Railway Company opened a line from Midland Junction to Walkaway in 1894, where it met the WAGR line from Geraldton opened in 1887. It was acquired by the WAGR in 1964.

The Northam line was extended to Southern Cross in 1894 and Coolgardie and Kalgoorlie in 1896. This line connected with the standard gauge Trans-Australian Railway to eastern Australia in 1917 at a break-of-gauge. The replacement standard gauge line was open in 1968

The isolated Marble Bar Railway was opened in July 1911. The last train to run out of Port Hedland operated on 25 October 1951, with the railway closed on 31 October 1951.

The Hopetoun to Ravensthorpe railway was an isolated branch opened on 3 June 1909, and closed on 23 February 1935. The Hopetoun jetty line was handed over to the Harbour and Light Department on 1 January 1936 - it was officially closed on 13 January 1946. 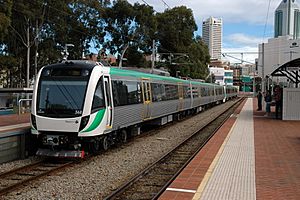 Transwa controls public transport services outside of Perth, including passenger service from Perth to Kalgoorlie, Northam and Bunbury. These trains are known as the Prospector, AvonLink, and Australind

Great Southern Rail operates the Indian Pacific from Perth to Adelaide and Sydney. 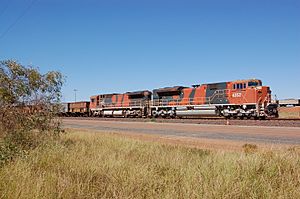 Four isolated heavy duty railways for the cartage of iron ore in the Pilbara region have always been private concerns operated as part of the production line between mine and port. These lines have pushed the limit of the wheel to rail interface which has led to much useful research of value to railways worldwide.

In 2007, a fifth line is under construction by the Fortescue Metals Group. A sixth iron ore line has been proposed to the port of Oakajee, and this will have open access to any iron ore mine wishing to use it. A sixth dual gauge network based on the new Oakajee Port north of Geraldton has been proposed by WestNet Rail.

In 2010, Rio Tinto announced plans to expand capacity on the railway line linking its iron ore mines to Dampier; this would increase capacity to 230 million tonnes per year, to meet increasing demand for iron ore.

The railway lines are:

All content from Kiddle encyclopedia articles (including the article images and facts) can be freely used under Attribution-ShareAlike license, unless stated otherwise. Cite this article:
Rail transport in Western Australia Facts for Kids. Kiddle Encyclopedia.