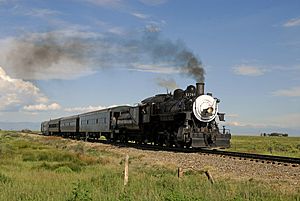 The Rio Grande Scenic Railroad of Colorado, owned by Iowa Pacific Holdings of Chicago, was a heritage railway that operated from 2006 to 2019 in and around the San Luis Valley, on trackage of the San Luis and Rio Grande Railroad. Located 200 miles (320 km) south of Denver, Colorado, the Rio Grande Scenic Railroad operated between Alamosa and La Veta. This 4 ft 8 1⁄2 in (1,435 mm) standard gauge route, featuring a climb over the Sangre de Cristo Mountains via Veta Pass, dates back to 1899 and is a successor to the original 3 ft (914 mm) narrow gauge La Veta Pass line of the Denver and Rio Grande Railway, completed in 1878. In keeping with the Denver & Rio Grande Western slogan Scenic Line of the World (see emblem here), the trip between Alamosa and La Veta offered views of several of Colorado’s 14,000-foot (4,300 m) peaks. The railroad ceased operating excursions following a wildfire that damaged some of their facilities, as well as the parent company SLRG entering Chapter 11 bankruptcy in late 2019.

The predecessor of the railroad was credited for opening the San Luis Valley to the rest of the world by laying tracks across its borders. The town of Alamosa was literally built in one day with buildings transported by the Denver and Rio Grande Western Railroad in 1878. By 1890, and during the following half-century, Alamosa was the hub for 3 ft (914 mm) narrow gauge railroading in North America. The railroad departs from the original depot in the heart of downtown Alamosa, where freight trains once delivered ore, lumber, sheep, cattle and farming products, and shipped out agricultural and mining products. Trains from Denver, Durango, Creede, Salida and Santa Fe, New Mexico arrived and departed daily with passengers.

The Rio Grande Scenic Railroad collection included both vintage steam locomotives and diesel locomotives. Notably, they operated former Lake Superior and Ishpeming Railroad locomotive #18, built by the American Locomotive Company at its Pittsburgh works in 1910. This locomotive previously operated on the Grand Canyon Railway and the Mount Hood Railroad. They also owned former Southern Pacific locomotive #1744, was sold to the Pacific Locomotive Association and moved to the Niles Canyon Railway. #18 is still on the property and is for sale as of 2021.

The Rio Grande Scenic operated a collection of historic passenger cars in their excursion service, including:

The Rio Grande Scenic operated a variety of special events, including Mother’s Day Brunch in the dome cars, Rails & Ales Brewfest, Jazz on the Tracks mountain concerts, Oktoberfest, fall foliage and pumpkin patch rides; and the Train to Christmas Town.

All content from Kiddle encyclopedia articles (including the article images and facts) can be freely used under Attribution-ShareAlike license, unless stated otherwise. Cite this article:
Rio Grande Scenic Railroad Facts for Kids. Kiddle Encyclopedia.