Rogers Creek (also known as Marsh Creek) is a tributary of Huntington Creek, in Luzerne County, Pennsylvania, in the United States. It is approximately 2.9 miles (4.7 km) long and flows through Ross Township and Huntington Township. The watershed of the creek has an area of 7.10 square miles (18.4 km2). It is designated as a Coldwater Fishery and a Migratory Fishery. The creek flows through a broad valley in some locations and a gorge in other locations. A number of mills were built along it in the late 1700s. 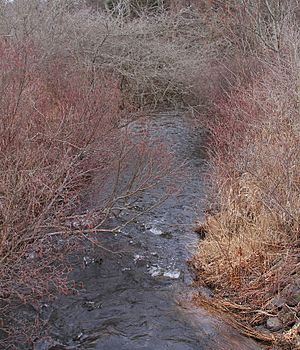 Rogers Creek begins at the confluence of the tributaries Marsh Creek and Black Ash Creek in Ross Township. It flows south-southwest for several tenths of a mile, almost immediately entering Huntington Township. The creek then turns west for a short distance before turning south and then meandering south-southwest for several tenths of a mile. It then turns south and after a short distance, reaches its confluence with Huntington Creek at Huntington Mills.

For a portion of its length, Rogers Creek is in a broad valley with glacial deposits lying underneath it. Further downstream, the creek flows through a narrow bedrock gorge with several waterfalls.

During pre-glacial times, Rogers Creek likely flowed through a saddle 0.5 miles (0.80 km) to the north of the gorge through which it currently flows. The saddle is now filled with glacial deposits and the road from Harveyville to Muhlenburg runs through its former location.

The watershed of Rogers Creek has an area of 7.10 square miles (18.4 km2). The creek is entirely within the United States Geological Survey quadrangle of Shickshinny.

The first gristmill in Huntington Township was constructed at the mouth of Rogers Creek in 1788 by a Mr. Hopkins. Hopkins also constructed a sawmill at the same location. Nathan Beach constructed the Rogers Mill on the creek in 1798. In the early 1900s, the Commissioners of Luzerne County requested permission to construct a bridge over the creek two miles east of Harveyville.

The drainage basin of Rogers Creek is designated as a Coldwater Fishery and a Migratory Fishery. Wild trout naturally reproduce in the creek from its headwaters downstream to its mouth. They also do so in the tributary Marsh Creek.

All content from Kiddle encyclopedia articles (including the article images and facts) can be freely used under Attribution-ShareAlike license, unless stated otherwise. Cite this article:
Rogers Creek (Pennsylvania) Facts for Kids. Kiddle Encyclopedia.