Roseville is the largest city in Placer County, California, located within the Sacramento metropolitan area. As of 2019, the US Census Bureau estimated the city's population to be 141,500. Interstate 80 runs through Roseville and State Route 65 runs through part of the northern edge of the city.

The settlement was originally a stage coach station called Griders. According to the Roseville Historical Society, in 1864 the Central Pacific Railroad tracks were constructed eastward from Sacramento, and when they crossed a small California Central Railroad line they named the spot "Junction". Junction eventually became known as Roseville. In 1909, three years after the Southern Pacific Railroad moved its facilities from Rocklin to Roseville, the town became an incorporated city. What followed was a period of expansion, with the community building more than 100 structures, including what was the largest ice manufacturing plant in the world (Pacific Fruit Express building, in 1913).

The city was a railroad town for decades, with the railroad employing up to 1,225 people by 1929, out of a population of only 6,425 people. With the onset of World War II, the rail yards became busier than ever, and the post-war building boom brought continued prosperity. However, the nature of the city changed dramatically in the 1950s.

During the 1950s the railroad continued to expand and upgrade, converting its steam engine fleet to all diesel engines by the end of the decade. However, the railroads began falling in the shadow of air travel and the development of the national Interstate Highway System. Thus, although the railroad remained (and still remains) a major employer, the expansion of the city began branching out into other employment sectors. Another important change during this period was the Washington Boulevard (then called Seawell) railroad underpass construction in 1950. While this improved the ability of people to travel from one side of the tracks to the other, it meant that people were no longer traveling through the Roseville business district north of the tracks. The completion of Interstate 80 in 1956 shifted the population from downtown to what would become known as East Roseville. The old downtown area slid into a gradual decline.

While the character of Roseville has changed over the years, as the city grew from its small-town beginnings to its status as a major urban city today, it has retained some of its historic beginnings. Roseville is no longer a railroad town, but the Union Pacific Railroad is still the sixth largest employer (see Major Employers section, below). Current visitors can now visit the revitalized historic Vernon Street and old Downtown areas which had been in decline for decades, but were recently rehabilitated (see Revitalization section, below).

Roseville has a hot-summer Mediterranean climate that is characterized by cool, wet winters and hot, dry summers (Köppen Csa). The "wet season" is generally October through April. Average daily high temperatures range from 53 °F (12 °C) in January to 94 °F (34 °C) in July and 92 °F in August (33 °C). Daily low temperatures range from 39 °F in winter to 61 °F in summer (4 to 16 °C). On March 27, 2014, an EF-0 tornado touched down in a neighborhood in this city. Like neighboring cities Lincoln, Rocklin and Sacramento. Roseville has snowless winters apart from some occasions. 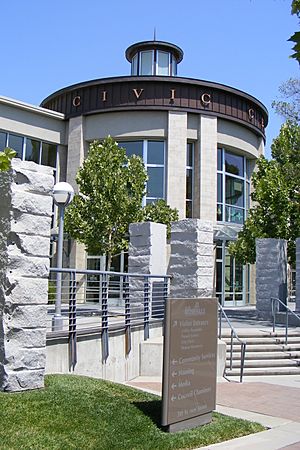 Beginning in the year 1988 the city embarked on a plan for redeveloping the downtown core, which includes about 207 acres (0.8 km2) of land. Over the past years and into the future, the city is spending tens of millions of dollars on revitalizing its historic areas, which have been in decline for many years. The city has completed an array of projects, including: the Vernon Streetscape Project, Atlantic Street Beautification, Civic Center Renovation, Civic Plaza Complex, Downtown Vernon Street and Historic Old Town, Historic Old Town Streetscape project, Riverside Avenue Streetscape project, Oak Street Improvement Project, and the Washington Boulevard pedestrian underpass. Highlights from these projects include the Roseville Arts! Blueline Gallery (opened in February 2008) the new parking garage (November 2007), and the creation of the new Civic Center and the Vernon Street Town Square for public gatherings. Renovation, rather than relocation, of the Civic Center signaled the commitment and investment of the city in its historic downtown areas. The Town Square in front of the Civic Center, opened in August 2013, provides a small raised stage, a water spray ground for children and families, and a beautiful, wide open space to hold community events.

Future projects being undertaken by the city include the Downtown Bridges project and the relocation of Fire Station #1. The purpose of the bridges project is to provide more pedestrian and bicycle connections between Royer Park on the south side of Dry Creek and the Vernon Street downtown area and Civic Center north of Dry Creek. The fire station will be relocated from its current location on Oak Street at the intersection of South Grant Street, to Oak Street at the intersection of Lincoln Street. While the existing and proposed locations are very close, the project would move the fire station to an area of less pedestrian activity, because it would no longer be located across the street from the Town Center.

Two highways run through the city: Interstate 80 and State Route 65 (the southern terminus of which connects to I-80).

Amtrak, the national passenger rail system, provides service to Roseville at the Roseville Amtrak Station and is part of the Capitol Corridor.

Roseville Transit is a public transit service overseen by the city of Roseville and operated by MV Transportation. The system provides a total of 12 regular local routes, as well as the Roseville Transit Dial-A-Ride (DAR) and Roseville Transit Commuter service. There are several stops where connections may be made with the Sacramento Regional Transit line and Placer County Transit.

Placer County Transit connects Roseville with the Watt/I-80 RT light rail station, as well as the cities of Auburn, Lincoln, Rocklin, and other cities along the Interstate 80 corridor. The Placer Commuter Express service to Sacramento also serves the Taylor Rd. park and ride lot.

Major healthcare providers in the city include Sutter Roseville and Kaiser Permanente. There are multiple smaller clinics located near or around the city. UC Davis Medical Center is also located in nearby Sacramento.

On April 28, 1973, 18 boxcars loaded with bombs en route to the Concord Naval Weapons Station began detonating in the Southern Pacific Railroad yard after one of the cars caught fire. More than 6,000 bombs detonated, injuring more than 350 people. The explosions caused damage to 5,500 buildings up to 6,800 feet (2,070 m) away. The cause of the initial car fire has never been determined. In the late 1990s, development in the area by the Union Pacific Railroad uncovered more unexploded ordnance, which was eventually removed.

On October 21, 2010, a young man entered the GameStop store inside Westfield Galleria at Roseville "speaking incoherently" and claiming to have a handgun. The man ordered the employees and customers to vacate the store and proceeded to set fire to the merchandise in the store room. As police and fire crews converged on the scene, the suspect barricaded himself outside the store and began setting other fires. After breaching the barricade, several police officers led the suspect out in handcuffs shortly after 1:00 PM. The mall was evacuated, along with police and fire crews, during the incident due to concerns of a possible incendiary or explosive device in a backpack left behind by the suspect. Due to the wait for the bomb squad, the fire spread and consumed large areas of the ceiling duct work and roof. The suspect, identified as Alexander Piggee, had also set a fire in a local Walmart garden department earlier in the day. He was sentenced to 180 months in prison followed by 72 months surveillance on August 2, 2011, after a guilty plea. The affected wing of Westfield Galleria at Roseville was closed until October 6, 2011, while repairs were made to approximately 40 stores and expansions built.

The city of Roseville has a variety of businesses. It has encouraged the addition of large retail centers, including one of the largest auto malls in the country, which contributes significantly to sales tax receipts at the city and county level. Revenue from sales tax has been a main reason why the city of Roseville has been able to keep up the city's infrastructure as the population has dramatically increased. This environment has produced a mix of housing, small and large employers, as well as shopping opportunities. A popular water park, Roseville Golfland SunSplash, is also located in Roseville. Companies based in the city include financial technology unicorn GoodLeap.

Shopping plays a vital role in the economy of Roseville, which has the thirteenth highest retail sales of all California cities. Roseville is considered a regional shopping destination, with the Westfield Galleria at Roseville being the main shopping center in the city and the second-largest shopping mall in Northern California. Westfield embarked on a 487,806-square-foot (45,319 m2) expansion project costing $270 million, because of the revenue they acquire from this high-end mall.

Across the street from the Galleria, Peter Bollinger Investment Company built a $70 million complex named "Fountains at Roseville". Fountains at Roseville is a 330,000 sq ft (31,000 m2) retail center that includes recreation centers. The first phase opened to the public on June 30, 2008, and includes retailers Whole Foods Market, White House Black Market, and Sunglass Hut, as well as a vast variety of casual and fine dining options. Plans call for future construction of hotel, additional retail, and office buildings as well.

All content from Kiddle encyclopedia articles (including the article images and facts) can be freely used under Attribution-ShareAlike license, unless stated otherwise. Cite this article:
Roseville, California Facts for Kids. Kiddle Encyclopedia.