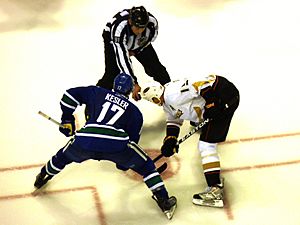 Getzlaf faces off with Ryan Kesler of the Vancouver Canucks in 2009.

Ryan Getzlaf (born May 10, 1985) is a Canadian professional ice hockey centre who currently serves as captain of the Anaheim Ducks of the National Hockey League (NHL). A first round selection, 19th overall, at the 2003 NHL Entry Draft, Getzlaf has played his entire professional career in the Ducks organization and ranks as one of the franchise's all-time leading scorers. He has played in three NHL All-Star Games and was a member of the Ducks' 2007 Stanley Cup championship team. A playmaker and power forward, Getzlaf has led the Ducks in assists seven times, including a franchise record of 66 in 2008–09.

As a junior, Getzlaf played four seasons with the Calgary Hitmen and was twice named to a Western Hockey League (WHL) all-star team. Internationally, he has represented Canada on numerous occasions. Getzlaf was a member of the 2005 World Junior Championship squad considered the greatest in Canadian history, and won a silver medal at the 2008 IIHF World Championship. A two-time Olympian, Getzlaf played with Canadian teams that won gold medals at the 2010 and 2014 Winter Games.

All content from Kiddle encyclopedia articles (including the article images and facts) can be freely used under Attribution-ShareAlike license, unless stated otherwise. Cite this article:
Ryan Getzlaf Facts for Kids. Kiddle Encyclopedia.