Sánchez Ramírez is a province of the Dominican Republic. It is in the central part of the country. Its capital city is Cotuí.

It was created in 1952. It was a municipality of the Duarte province before being elevated to the category of province.

The territory of the province was part of the La Vega Province from the Dominican independence (in 1844) until 1945 when most of the territory was made part of the Duarte Province.

On 3 March 1952, the province was created with the territory of Cotuí, part at that moment of the Duarte Province, and the southeastern part of La Vega province. When it was created, it had only two municipalities: Cotuí, the provincial capital, and Cevicos. In 1961, Fantino became the third municipality of the province; in 2002, Villa La Mata became the fourth municipality.

The Sánchez Ramírez province is in the centre of the country, in the southeast limit of the Cibao Valley (part of the region called Eastern Cibao). It is bordered to the north by the Duarte province, to the east and south by the Monte Plata province, to the southwest and west by the Monseñor Nouel province and to the northwest by the La Vega province.

Its population represents 1.6% of the total population of the country and the province is ranked as the 19th (out of 31 plus the National District) more populated province.

As of 2016[update], the total estimated propulation of the province is 152,036 inhabitants.

The largest city of the province is Cotuí, its head municipality or capital, with an urban population (in 2010) of 45,135 inhabitants.

There are two regions in the province:

The most important river is the Yuna river, that flows from west to east; the other rivers are all tributaries of this river. Other rivers are Cevicos, Chacuey and Maguaca; they flow from the Sierra de Yamasá into the River Yuna.

There are 4 municipalities and 8 municipal districts (M.D.) in the province. 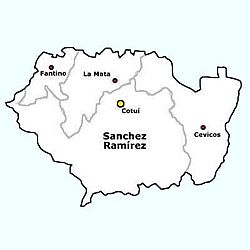 The main economic activities in the province are farming and mining. Close to the town of Las Lagunas, in the Sierra de Yamasá, are the gold mines.

The main products of farming in the Sierra de Yamasá are cacao, oranges and tobacco. In the Yuna valley, rice is the most important product but pineapple and orange are also produced.

Cattle are also important in the province, mainly in the northwestern part of it.

All content from Kiddle encyclopedia articles (including the article images and facts) can be freely used under Attribution-ShareAlike license, unless stated otherwise. Cite this article:
Sánchez Ramírez Province Facts for Kids. Kiddle Encyclopedia.