Monte Plata is a province of the Dominican Republic; its capital city has the same name, Monte Plata. It was split from San Cristóbal in 1982.

The province was given the name of the capital city, Monte Plata. In colonial times, people from Monte Cristi and Puerto Plata came to live to this region by orders of the Spanish king and gave to the town a new name that comes from the two original towns, Monte Plata.

After the Dominican independence from Haiti in 1844, this region was part of the old Santo Domingo Province. During the Restoration War against Spain (1861 - 1865), there were several important battles in the region.

In 1932, the region was made part of the new San Cristóbal province and then it was made a province with the name of Monte Plata but soon the name was changed to Monseñor Meriño after the Archbishop Fernando Arturo de Meriño, who was President of the Dominican Republic in 1880-1882.

Then, in 1944, the province was made part of the San Cristóbal province again until 1982 when the new Monte Plata province was created with the municipalities of Monte Plata, Sabana Grande de Boyá, Yamasá and Bayaguana. In 2004, Peralvillo became a municipality.

The Monte Plata province is in the centre of the country. To the north, it has the Sánchez Ramírez, Duarte and Samaná provinces; to the east, the Hato Mayor and San Pedro de Macorís; to the south, the Santo Domingo province; and to the west, the San Cristóbal and Monseñor Nouel provinces.

Its population represents 1.97% of the total population of the country and the province is ranked as the 15th (out of 31 plus the National District) more populated province.

As of 2016[update], the total estimated propulation of the province is 189,166 inhabitants.

The altitude of Monte Plata, provincial capital, is 53 m (174 ft) above sea level.

The Sierra de Yamasá is found to the east and north of the province. Los Haitises is a karstic region found in the northwestern part of the province; most of it is now a national park.

The river Ozama is the most important river in the province. Other rivers are Yabacao, Yamasá, Comate, Mijo and Guanuma, all tributaries of the Ozama.

The Monte Plata province has a tropical wet climate with no dry or cold season as it is constantly moist.

There are five municipalities and seven municipal districts (M.D.) in the province. 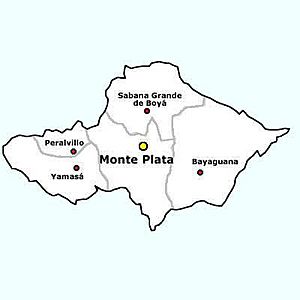 The most important economic activity of the province is farming. Some important crops are sugar cane, cacao and fruits like orange.

All content from Kiddle encyclopedia articles (including the article images and facts) can be freely used under Attribution-ShareAlike license, unless stated otherwise. Cite this article:
Monte Plata Province Facts for Kids. Kiddle Encyclopedia.