Monseñor Nouel is a province of the Dominican Republic. It is in the central part of the country. Its capital city is Bonao.

The province was created in 1982. It was a municipality of the La Vega province before being elevated to the category of province.

The province was named after Archbishop Adolfo Alejandro Nouel, who was President of the Dominican Republic in 1912-1913.

The valley where is the province was named by the Spanish conquistadors as Sabana de Bonao ("Bonao Savanna"; Bonao was the Taíno name of the region.

Bartholomew Columbus, younger brother of Christopher Columbus, founded here a fort in 1495-1497 and Bonao became one of the most important city of the Hispaniola island during the first years of the Spanish colony.

The Monseñor Nouel province is bordered to the north and the west by the La Vega province, to the east by the Juan Sánchez Ramírez and Monte Plata provinces and to the south by the San Cristóbal and San José de Ocoa provinces.

Its population represents 1.75% of the total population of the country and the province is ranked as the 17th (out of 31 plus the National District) more populated province.

As of 2016[update], the total estimated propulation of the province is 171,040 inhabitants.

The largest city of the province is Bonao, its head municipality or capital, with a population (in 2010) of 76,241 inhabitants.

The most important river is the Yuna, one of the largest of the Dominican Republic and of the Hispaniola island.

The climate of the province is a tropical climate, hot most of the year.

There are three municipalities and seven municipal districts (M.D.) in the province. 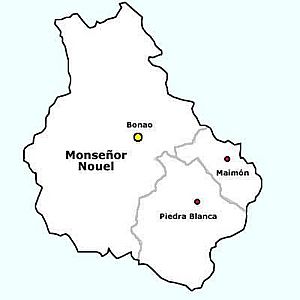 The main economic activities in the province are farming and mining (mainly surface mining of nickel).

It is a province with an important production of rice. Cattle raising is also important, mainly for milk.

All content from Kiddle encyclopedia articles (including the article images and facts) can be freely used under Attribution-ShareAlike license, unless stated otherwise. Cite this article:
Monseñor Nouel Province Facts for Kids. Kiddle Encyclopedia.