Sándor Petőfi ( né Petrovics; Slovak: Alexander Petrovič; Serbian: Александар Петровић; 1 January 1823 – most likely 31 July 1849) was a Hungarian poet and liberal revolutionary. He is considered Hungary's national poet, and was one of the key figures of the Hungarian Revolution of 1848. He is the author of the Nemzeti dal (National Song), which is said to have inspired the revolution in the Kingdom of Hungary that grew into a war for independence from the Austrian Empire. It is most likely that he died in the Battle of Segesvár, one of the last battles of the war. 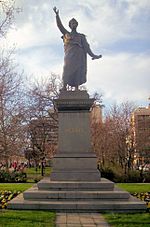 After the Revolution was crushed, Petőfi's writing became immensely popular, while his rebelliousness served as a role model ever since for Hungarian revolutionaries and would-be revolutionaries of every political colour.

In 1911, a statue of Sándor Petőfi was erected in Pressburg (Pozsony, present-day Bratislava), on the Main Square. In 1918, after the army of the newly independent First Czechoslovak Republic occupied the city, the statue was dynamited. After this sculpture was boarded over round temporarily until its removal, and replaced with a statue of Slovak poet Pavol Országh Hviezdoslav. Today, there is a statue of Petőfi in the Medic Garden (Medická záhrada).

During the late 1940s, Boris Pasternak produced acclaimed translations of Petőfi's poems into the Russian language.

Today, schools, streets and squares are named after him throughout Hungary and Hungarian-speaking regions of neighbouring states; in Budapest alone, there are 11 Petőfi streets and 4 Petőfi squares, see: Public place names of Budapest. A national radio station (Radio Petőfi), a bridge in Budapest and a street in Sofia, Bulgaria also bear his name, as well as the asteroid 4483 Petöfi, a member of the Hungaria family. Every Hungarian primary school child learns some of his poems by heart .

The Hungarian 10 Forint banknote valid between 1947-1992 depicted Sándor Petőfi on the obverse.

Petőfi has a larger than life terra cotta statue near the Pest end of Erzsébet Bridge, sculpted by Miklós Izsó and Adolf Huszár [hu]. Similar Petőfi statues were established in many other cities, as well, during the 19th century and the beginning of the 20th century. 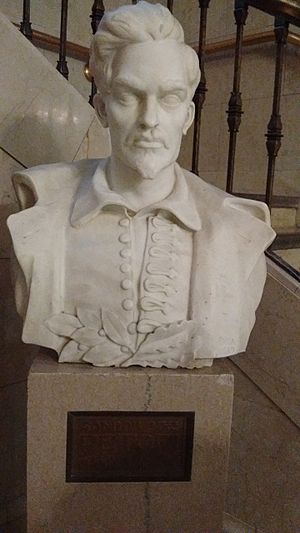 The bust of Sándor Petőfi at Cleveland Public Library 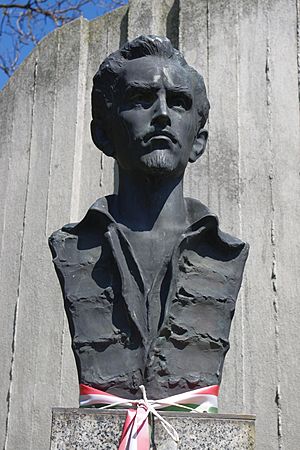 Hugó Meltzl was who made well known the works of Sándor Petőfi in abroad.

In Uzhhorod, Ukraine, there is a city square named after Sándor Petőfi.

In Oradea, Romania, there is a street and a park named after Sándor Petőfi.

In Tarnów, Poland there is a Petőfi Memorial Square with hand carved Székely gate leading to Petőfi's bust.

All content from Kiddle encyclopedia articles (including the article images and facts) can be freely used under Attribution-ShareAlike license, unless stated otherwise. Cite this article:
Sándor Petőfi Facts for Kids. Kiddle Encyclopedia.