Saxmundham (/ˈsæksməndəm/) is a small market town in Suffolk, England. It is set in the valley of the River Fromus, a tributary of the River Alde, approximately 18 miles (29 km) northeast of Ipswich and 5 miles (8.0 km) west of the coast at Sizewell. The town is bypassed by the A12 and is served by Saxmundham railway station on the East Suffolk Line.

The town's name allegedly derives from the Saxon "Seizmond's Home". The earliest recorded mention of Saxmundham is in the Domesday Book of 1086 which mentions three churches. It has had a market charter since at least 1272 AD and carries on the tradition to this day. 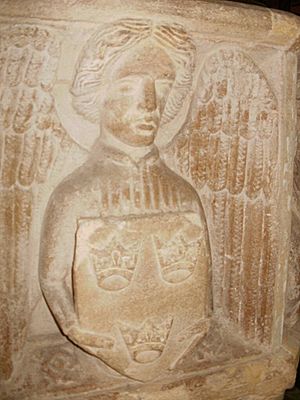 Carving of an angel holding a Three Crowns emblem on the baptismal font (c.1400); the crowns are a symbol of East Anglia

Brother Eadulf has become Saxmundham's most famous international fictional character. He appears in the best-selling Sister Fidelma mysteries written by Peter Tremayne (nom de plume of the Celtic scholar and author Peter Beresford Ellis). Brother Eadulf is companion and assistant to Sister Fidelma and often plays a crucial part in resolving the mystery. He is introduced as originally the hereditary gerefa (magistrate) of "Seaxmund's Ham in the land of the South Folk." He attends the famous Synod of Whitby in 664 AD and joins Sister Fidelma in solving a murder of one of the delegates (Absolution by Murder, 1994). He has since appeared in most of the novels and some of the short stories although the Saxmundham area has been used as a setting in only one of the novels; The Haunted Abbot (2002). Tremayne chose Saxmundham as Eadulf's place of origin because of local connections, the nearness of the town to an ancient royal burial site of the East Angles as well as the East Anglian historic connections with Irish Christian missionaries. He has appeared in all but two of the Sister Fidelma series of mystery novels, set in 7th century Ireland.

All content from Kiddle encyclopedia articles (including the article images and facts) can be freely used under Attribution-ShareAlike license, unless stated otherwise. Cite this article:
Saxmundham Facts for Kids. Kiddle Encyclopedia.