Sceale Bay (formerly Yanera) (pronounced "Scale Bay") is a small town 32 km south of Streaky Bay on the Eyre Peninsula of South Australia. With a permanent population of only 28, the town's numbers increase by threefold over the summer holiday period. The town is primarily an isolated holiday destination, with nothing in the way of commerce or industry occurring in its bounds. At the 2006 census, Sceale Bay had a population of 389.

The town was initially proclaimed under the name of Yanera in October 1888, but had been earlier named Sceale Bay by Captain Bloomfield Douglas of the South Australian Marine Board, therefore most people continued calling it by that name. Yanera was officially renamed Sceale Bay in 1940. The bay itself was formerly known as Sceale's Bay. A jetty was built to service the coastal traders in 1910, but despite a fierce fight to save it, was demolished in 1972.

The township of Sceale Bay lies on the bay of the same name. The protected waters of the bay have long sandy beaches with minimal swell. However the exposed coast surrounding the bay feels the full force of the Southern Ocean swells. Cliffs and diverse rock formations can be found on the coast bordering the bay. Inland is highly unremarkable for the most part, with agricultural land dominating the scenery. .

The town is a minor tourist destination, but the small size of the town and restricted accommodation keeps numbers low. A caravan park once existed in the town, as well as a new general store that provided petrol, take away food, fishing and camping needs but has also since closed down

Fishing is the areas major attraction, with boat, rock and beach fishing all possible in the vicinity of the town. All year round the deep reefs hold Snapper, Trevally, Nannygai[disambiguation needed], Whiting, Kingfish and in the summer, Bluefin Tuna congregate on the offshore lumps. Whiting, Tommy Ruff and Salmon can be caught in the calmer protected waters. A boat ramp is located in Sceale Bay. Murphy's Haystacks are roughly 15 minutes drive from the township. 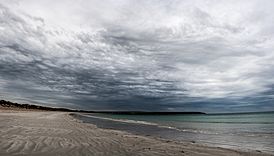 All content from Kiddle encyclopedia articles (including the article images and facts) can be freely used under Attribution-ShareAlike license, unless stated otherwise. Cite this article:
Sceale Bay, South Australia Facts for Kids. Kiddle Encyclopedia.