In 1870, the Union Pacific chose the town as the point at which Texas cattle being driven north would be loaded onto trains. With this, Schuyler became Nebraska's first "cow town". However, the resulting boom, which saw a six-fold increase in the town's population (from 100 to 600) and around 50,000 head of cattle pass through, was only temporary: the next year, the terminus of the cattle trail had moved west to Kearney.

The city's early residents were Czech, Irish, and German settlers. Settlement was enabled by Schuyler's geographic position, which caused the community to be associated with a number of historic overland transportation routes, including:

With the establishment of Cargill Meat Solutions packaging plant, the demographics of Schuyler have undergone rapid and lasting change. It is at present one of Nebraska's most Latino communities.

In 1935, monks from the Congregation of Missionary Benedictines of Saint Ottilien established a community in Schuyler as a means of supporting the Congregation's missions in Africa and Asia. At present, Christ the King Priory is home to eleven monks. The monks' apostolate has expanded to providing retreats at the recently constructed Saint Benedict Center, four miles north of Schuyler. 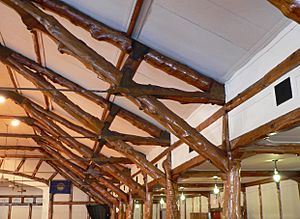 The Oak Ballroom, completed by the Works Progress Administration in 1937 and now listed on the National Register of Historic Places, was built using dozens of native oak trees hauled to the building site from the nearby Platte River using horse and buggies.

Schuyler's single largest employer is the Cargill beef-processing plant, with approximately 2000 employees. Other major employers include Schuyler Community Schools, with 245 employees; Alegent Health Memorial Hospital, with 82 full-time and 31 part-time employees; and QC Supply, a manufacturer and distributor of farm and ranch supplies with 75 full-time employees.

All content from Kiddle encyclopedia articles (including the article images and facts) can be freely used under Attribution-ShareAlike license, unless stated otherwise. Cite this article:
Schuyler, Nebraska Facts for Kids. Kiddle Encyclopedia.