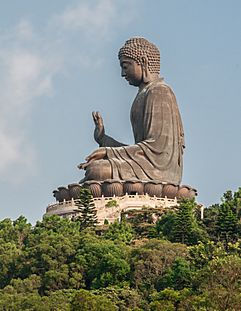 A statue of the Buddha

Gautama Buddha was born in Nepal. His family name is Siddhārtha. Gautama was the person who began the religion of Buddhism. He lived from about 563 BC to about 483 BC. He is also called Sakyamuni or Tathāgat.

Siddhārtha Gautama (Sidaaha) was born in the kingdom of Kapilvastu in Nepal. At present this birthplace is called Lumbini, in Nepal. At that time, a clan called the Shakya's ruled Kapilvastu. His father was a king named Suddodana Tharu, and his mother was Maya Devi. Siddhārtha lived in luxury; his father kept trouble and hard work far from him. A seer predicted that if Siddhārth stayed inside his palace his whole life, then he would become a great king. However, if he left the palace, then he would become a great religious leader. The king did not want his son to become a religious leader. He kept Siddhartha in the palace for his whole childhood.

When he was older, his father found a woman for Siddhārtha to marry at the age of 16. He married the woman named Yashodhara, and they had a son, Rahul. Although Gautama had everything he could want, he still was not happy. He wanted to learn the meaning of his existence.

He got out of the castle against his father's orders. He saw the "Four Passing Sights": an old crippled man, a sick man, a dead man, and a holy man with no home. Right then, Gautama knew that nothing can stop people from being born, becoming old, getting sick, and dying. He decided to give up his worldly life. He would not keep his wives, his children, his wealth, or his palace. He would become a holy man with no home. He would look for the answer to the problem of birth, old age, sickness, and death. He left his home in the middle of a dark and stormy night.

At that time, holy men were usually ascetics. They hurt their bodies in order to help their spiritual beings. They do not do things they like so they can defeat their desires. The most ascetic kinds of holy men were called Jains. They practiced self-denial and made themselves suffer very much. They believed this would free the ātman (soul) from pain and sadness. Siddhārth did these things well. Eventually he was better than his teachers. He still found no answer, and he left his teachers, some friends and he went even farther. He ate only six grains of rice a day. He tried holding his breath. He became just skin and bones, and he nearly died. Still, he had no answer.

Siddhārth started to think again about this path. He thought there might be a better way than hurting himself. He found a fig tree (now called the Bodhi tree) and started to meditate. He told himself that he would not get up until he had found enlightenment. He meditated under the tree for 49 days. His mind is said to have become pure, and then, six years after he began his path, he said he found Enlightenment, and became the Buddha.

The life as a Buddha 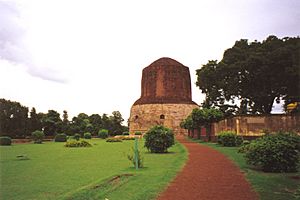 Sarnath (also known as "Deer Park") is said to be the place where the Buddha first taught.

When the Buddha became enlightened, he knew the answer to suffering, and he knew how to defeat suffering. This answer was called the Four Noble Truths. He was not sure if he should teach his new ideas or not. He asked himself if the world was ready for such a deep teaching. But in the end, he decided to travel to a town called Sarnath to teach the people his new way. He taught about the Four Noble Truths and the Noble Eightfold Path. The people listened to him.

When he taught, he did not pretend to be a god. He said he was just a man who had found the meaning of life (enlightenment), and that any person can also find the meaning of life. For the rest of his life, he walked all over Southern Nepal and parts of India to teach people what he believed. He started a Sangha, which is a group of Buddhist monks and nuns. Many people became enlightened because of him. At the age of 80, Gautama Buddha died of food poisoning.

The teachings of the Buddha are known as Buddhism. Buddhism is mostly about ending the feeling of pain that all people feel inside. Gautama Buddha taught that pain is a part of all life. He taught that pain is because of desire. And he showed that there is a way to end desire and end pain by doing good things, not doing bad things, and training one's mind. This is done to end pain and gain enlightenment.

The Buddha would not say if gods exist or not. He taught that people should not look to gods to save them or bring them enlightenment. The gods may have power over world events and they might help people, or they might not. But Buddha believed that it is up to each person to become enlightened.

All content from Kiddle encyclopedia articles (including the article images and facts) can be freely used under Attribution-ShareAlike license, unless stated otherwise. Cite this article:
Gautama Buddha Facts for Kids. Kiddle Encyclopedia.