Sigriswil is a municipality in the administrative district of Thun in the canton of Bern in Switzerland. 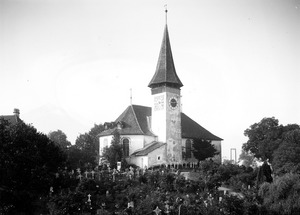 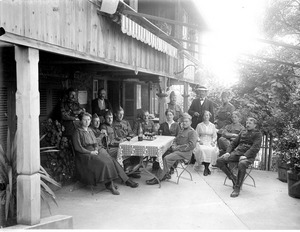 Soldiers relaxing in Sigriswil between 1914 and 1918

Archeological remains dating from the Late Neolithic and Bronze Age show that the area around Sigriswil has been inhabited as early as 5000 years ago. It's thought that the first modern inhabitants can be traced back to Alamanni tribesmen who settled on the banks of Thun lake around the 5th Century A.D., later moving on up into the higher elevations around the modern village of Sigriswil between the 8-10th century. The village church of St. Gallus was first mentioned in 1222-23 in the Strättliger Chronicle as one of the twelve churches around Lake Thun. However, it was probably built during the 10th to 12th centuries. The patronage rights over the church and the Justistal settlement and alpine meadow were given to Interlaken Abbey in the 13th century.

In 1347, the inhabitants of Sigriswil were able to buy their independence in the Castle of Thun from Count Eberhard (a member of the Kyburg dynasty who had fallen on hard financial times) for the sum of 300 "Pfund Thuner Pfennige" (300 pounds of 'Thun Pennies'). By 1384, Bern ruled over the municipality, though the citizens of Sigriswil were able to govern themselves.

Following the 1798 French invasion, Sigriswil became part of the newly created Canton of Oberland in the Helvetic Republic. After the collapse of the Republic and 1803 Act of Mediation it rejoined the Canton of Bern in the newly created Thun District.

Traditionally the villagers of Sigriswil fished in Lake Thun, raised crops and vineyards on the valley floor and raised cattle in the summer in high alpine meadows before bringing them down for winter. By 1914 a combination of disease, competition from imported wine and the looming World War destroyed the wine industry in the municipality. During the late 19th and early 20th century steam boats and improved roads began bringing tourists to the municipality. Hotels and restaurants opened along the lake shore and on the slopes. The first class hotels settled along the lake shore, while small chalets and vacation homes developed in the mountain valleys and terraces. Today, Sigriswil is a tranquil alpine farming village as well as a popular tourist resort. 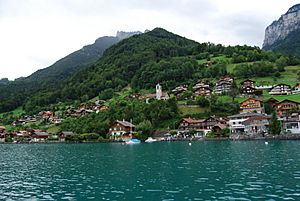 From the same survey, housing and buildings made up 2.6% and transportation infrastructure made up 1.8%. A total of 41.9% of the total land area is heavily forested and 3.8% is covered with orchards or small clusters of trees. Of the agricultural land, 16.5% is pasturage and 21.8% is used for alpine pastures. All the water in the municipality is flowing water. Of the unproductive areas, 4.2% is unproductive vegetation and 4.2% is too rocky for vegetation.

The municipality is spreads over lakes and mountains along the right bank of Lake Thun. It includes the watershed of the Zulg river and the Güggisgrat and Sigriswilgrat mountain ranges. It consists of eleven villages (Gunten, Merligen am See, Aeschlen, Sigriswil, Endorf, Ringoldswil, Tschingel, Schwanden, Meiersmaad, Reust and Justistal) as well as scattered hamlets.

On 31 December 2009 Amtsbezirk Thun, the municipality's former district, was dissolved. On the following day, 1 January 2010, it joined the newly created Verwaltungskreis Thun.

All content from Kiddle encyclopedia articles (including the article images and facts) can be freely used under Attribution-ShareAlike license, unless stated otherwise. Cite this article:
Sigriswil Facts for Kids. Kiddle Encyclopedia.