Krattigen is a municipality in the Frutigen-Niedersimmental administrative district in the canton of Bern in Switzerland.

It is located on a hill overlooking Lake Thun.

The earliest trace of a settlement in the area is a Late Bronze Age axe which was discovered at Krattigengraben. During the Middle Ages, Rotenbühl Castle was built near the village. The castle does not appear in any contemporary record and only the moat is still visible today. 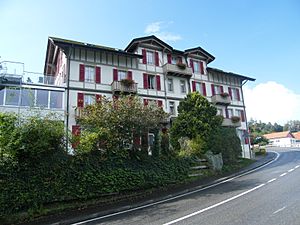 By 1300 it was a fief of the Lords of Corbières. Soon thereafter it became a fief of the Bernese Schultheiss Kuno Muenzer. After the death of King Albert I of Germany in 1308, the Austrian Habsburgs advanced a claim on Krattigen.

The Bernese Scharnachtal family began buying the rights to the area in 1366 and in 1483 they finally owned the entire village. However, in 1513, Bern acquired the village and placed it under their representative at Mülenen. Later Bern placed the village under Frutigen. 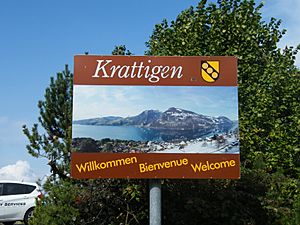 Traditionally the local economy was based on agriculture and seasonal alpine herding. In the 18th century a gypsum mine opened near the village. Today the mine is part of the Leissigen gypsum factory.

Small businesses and tourism began to make inroads into the village during the 20th century. While the municipality lacks a connection to the Swiss Federal Railways network, almost three-quarters of the working population commute to jobs outside the municipality.

All content from Kiddle encyclopedia articles (including the article images and facts) can be freely used under Attribution-ShareAlike license, unless stated otherwise. Cite this article:
Krattigen Facts for Kids. Kiddle Encyclopedia.