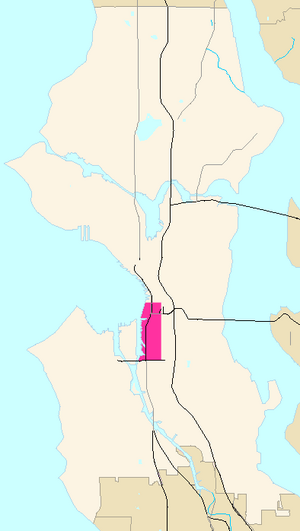 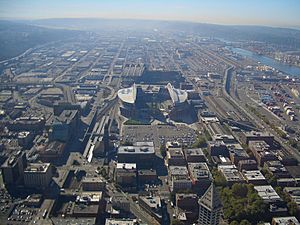 King Street Station, Safeco Field, CenturyLink Field, and most of the rest of SoDo can be seen from Columbia Center observation deck 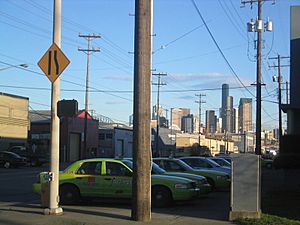 Seattle skyscrapers as viewed from SoDo

SoDo was originally named for being located south of the (King)dome, but since the stadium's demolition in 2000, the name has been taken to mean south of downtown. The moniker was adopted in the 1990s after the renaming of the Sears building to the SODO Center (later Starbucks Center, the world headquarters of Starbucks at First Avenue S. and S. Lander Street). It includes Seattle's downtown stadium district of Safeco Field (where Major League Baseball's Seattle Mariners play their home baseball games) and CenturyLink Field (built on the former Kingdome site; where the NFL's Seattle Seahawks play their home football games and Major League Soccer's Seattle Sounders FC play their home soccer matches). The Mariners' popular marketing campaign in the early 2000s used the SoDo moniker in the catchphrase "SoDo Mojo".

SoDo deliberately echoes SoHo in New York City, where, during the 1970s, cheap spaces vacated by departing factories were converted by artists into lofts and studios. SoDo has undergone a similar process but has not experienced much of the gentrification experienced by its putative model. Some of SoDo's warehouse buildings remain in their original use; others have been carved up for artists' lofts, art galleries, and an assortment of other businesses. One building directly across from Safeco Field houses Pyramid Breweries, Inc. downstairs and a variety of small offices upstairs. As one travels further south along First Avenue S., these conversions peter out, and light manufacturing, warehouses, and warehouse-style retail stores predominate.

According to the 2000 U.S. Census, SoDo has a population of 2,602, with a median age of 41.2; 458 residences are owner-occupied and 536 are rented. (This probably slightly understates the population, because there are a certain number of artists living illegally in studio spaces that are not zoned residential, plus a resident homeless population.) The average annual household income is given as $42,208; the racial breakdown is 41% White, 28% Asian, 14% Black, 9% Hispanic/Latino, 3% American Indian/Alaska Native, and 5% other.

All content from Kiddle encyclopedia articles (including the article images and facts) can be freely used under Attribution-ShareAlike license, unless stated otherwise. Cite this article:
SoDo, Seattle Facts for Kids. Kiddle Encyclopedia.