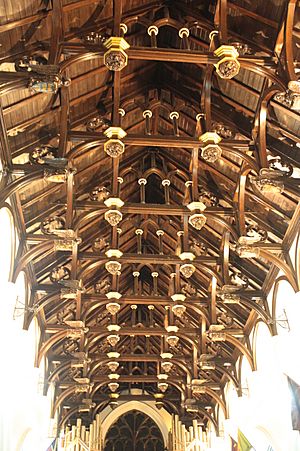 South Leith Parish Church, originally the Kirk of Our Lady, St Mary, is a congregation of the Church of Scotland. It is the principal church and congregation in Leith, in Edinburgh. Its kirkyard is the burial place for John Home (author of Douglas) and John Pew, the man from whom the author Robert Louis Stevenson reputedly derived the character of Blind Pew in the novel Treasure Island. The church has been repaired, used as a magazine and reconstructed but still looks similar to its appearance on a 1608 seal.

The church has a long history although most of the visible building is more recent. The church began as a chapel dedicated to St Mary which was erected in 1483 and dedicated in 1487. (From the twelfth century South Leith had been part of the parish of Restalrig and had no church of its own.) As part of the dedication King James III of Scotland gave 18 shillings to the kirk. 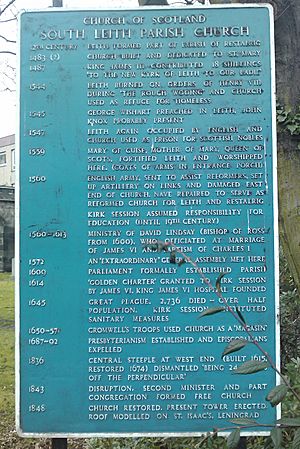 The history of the church

In 1559, Mary of Guise, the regent of Scotland, worshipped at this church. Her coat of arms is displayed in the entrance of the church today. Mary had fortified the town and she was in Leith being guarded by the thousands of French troops stationed here.

In the following year, 1560, the English fleet and troops arrived at the invitation of Protestant Lords of the Congregation to lay siege to Leith in order that the French might be persuaded to leave. The nave of this church had to be repaired due to damage caused by the English artillery. The French and the English troops did leave under the terms of the Treaty of Edinburgh. This agreement shifted the allegiance of Scotland from Catholic France to Protestant England.

The consequences of the treaty and the peace that followed made enormous changes to the role of this church. Nearby Restalrig Church was the parish church. That church could trace its history back to events in the year 700 when Saint Rule and Saint Triduana had arrived in Scotland. Triduana had stayed on in Scotland and when she died the church of Restalrig was founded at that place. Now however feelings had changed and by the order of the General Assembly that church was razed to the ground and this church, although damaged, became the new church of the parish of Leith. The church became the de facto Parish Kirk for South Leith after Restalrig Kirk, which up until then had served that community, was demolished by order of the newly formed General Assembly. 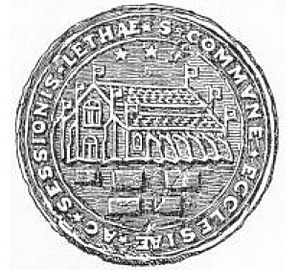 The form of worship at the church was also changed in from Roman Catholic to Presbyterian, as a consequence of the Reformation. The church came under the ministry of David Lindsay who became the Bishop of Ross.

The new arrangement of power took time to settle down. In 1571 there was much discussion regarding the transfer of church positions. Noblemen were becoming bishops without any further qualification and positions in the church were being given to inappropriate people – including some who were still not legally adult. In 1572 an "extraordinary" general meeting was called by the regent (the Earl of Mar) and held here. The meeting made resolutions but they were not fully implemented as the King (James VI of Scotland was still a minor.

On 1 May 1590, James VI and his wife Anne of Denmark arrived in the Water of Leith. After a welcoming speech in French by James Elphinstone at the shore, Anne stayed in the King's Wark and James went alone to hear a sermon by Patrick Galloway in the Parish kirk.

The new status for the South Leith kirk as Parish church was confirmed by Act of Parliament in 1609. This was recorded in the parish records which still survive back to May 1597. The seal of a charter granted in 1608 to a James Hall shows the church as being not dissimilar to its present appearance. The kirk records record that in 1615 the church was added to with a central steeple. 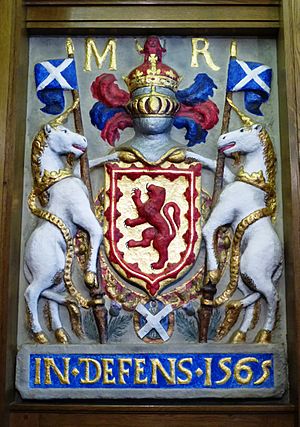 Queen Mary's royal coat of arms (1565), removed from Leith Tolbooth and built into the church porch

In the middle of the 17th century the church was involved in initiating and supervising sanitary measures and relieving the distress of victims during the Plague of 1645. Over 2,700 people lost their lives – this was half the population. From 1650 to 1657 the Parliamentarians used the church as a magazine during the civil war. The kirk records record the problems at that time with church services having to be conducted wherever space allowed.

From 1687 until 1692 the confirmation of the congregations as Presbyterian was demonstrated as the church expelled those who were Episcopalian.

In 1766 the new minister was Henry Hunter who went on to publish sermons and translate the work of leading French scientists. 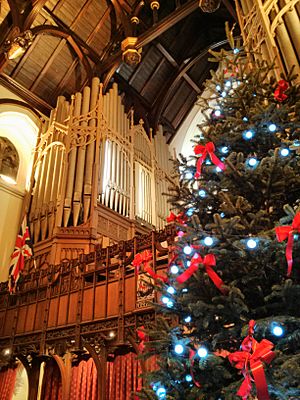 The organ and hammerbeam ceiling at Christmas

From 1824 until 1843 the minister was Rev James Grant (1800-1890) who came to later fame as the longest serving Director of Scottish Widows (1840 to 1890) and served as Moderator of the General Assembly of the Church of Scotland in 1854. During his ministry, in 1836 the central steeple that had stood since 1615 was dismantled. William Burn reported that this was essential as the steeple rested on the original west wall whilst the other newer walls had sunk and caused the tower to lean.

The Disruption of 1843 caused an inevitable loss of congregation. However the church recovered and reconstruction (and restoration) of the building took place 1847–48 included the installation of a magnificent hammerbeam nave roof, together with an entire remodelling of the exterior, including a new square tower, all of which was designed by the architect Thomas Hamilton. The church is a category A listed building. The roof design is said to be based on St Isaac's in St Petersburg. During this restoration the west window was salvaged and re-used at St Conan’s Kirk.

In 1915 over 200 soldiers were killed and a similar number seriously injured in the Quintinshill rail disaster at Gretna. The soldiers were from the 1st/7th Battalion, The Royal Scots (The Royal Regiment) which was a Territorial Battalion before World War I. The majority of the soldiers were recruited from Leith, with others recruited from nearby Musselburgh and Portobello. The Colours of this Battalion are still kept at the church in memory of the loss to the community. The soldiers are buried in Rosebank Cemetery in nearby Pilrig.

South Leith Parish Kirk is situated on the Kirkgate, Leith, currently a pedestrian precinct. It sits within the parish which has been described as triangular having three main borders. On the west it borders the historic parishes of North Leith, Edinburgh and St Cuthbert's; on the south by Duddingston and Cannongate and the remaining border on the north east is the natural barrier of the Firth of Forth. Historically the parish covered about 2,200 acres (8.9 km2) but over time newer parishes have been identified within its borders as the surrounding population grew and rearranged.

The church is home to the 10th Leith Boys Brigade Company and the Girl Guides. They meet at the church's halls in nearby Henderson Street. 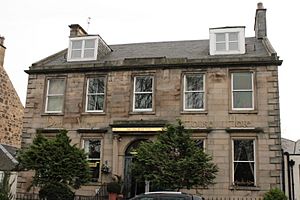 The original manse was presumably on the Kirkgate but its location is unknown. A new manse was built at Hermitage Place, facing onto Leith Links in 1820. This old manse still exists but is now a hotel. The current manse is on Claremont Road, further to the east.

A communion token issued by the church.

The graveyard or kirkyard is the burial place for the playwright John Home, author of Douglas, and John Pew, the man from whom the author Robert Louis Stevenson reputedly derived the character of Blind Pew in the novel Treasure Island. Pew was a maltman and was reputed to have had 25 children. Stevenson was related to the Balfour family so he may have seen the Pew grave whilst visiting the church of his family. Other notable people are Adam Whyte who was Leith's first Provost, Hugo Arnot, historian, and John Hadaway, Lieutenant of the Bellerophon during the Battle of the Nile which no longer exists (whose memorial no longer exists?). The poet and songwriter Robert Gilfillan lies just to the south-east of the church.

In the grounds of the graveyard are structures which contain memorials. The structures appear to have been roofed and to have had dividing walls and gates for each family's memorial. The gates, roof and walls are no longer present.

The interior of the church has memorials to:

The controversial poet and tragedian Rev John Logan was minister from 1771 to 1786.

The present Minister is the Rev Iain May BSc MBA BD who was inducted into the charge on 18 April 2012. The former minister (1995-2011) was the Reverend Ian Y. Gilmour, who was previously minister at Drylaw Parish Church in Edinburgh. On 28 April 2011 Mr Gilmour became minister at St Andrew's and St George's West Church in the centre of Edinburgh.

At the time of the Disruption of 1843 the minister, Very Rev David Thorburn (1805-1893), who had been minister since 1833, left to create the Free Church of South Leith, where he remained minister until death. South Leith Free Church stood on the west side of Leith Links on what is now Johns Place. It was demolished in 1905 to allow completion of the large warehouse which surrounded it (now converted to flats and known as the Ropeworks).

All content from Kiddle encyclopedia articles (including the article images and facts) can be freely used under Attribution-ShareAlike license, unless stated otherwise. Cite this article:
South Leith Parish Church Facts for Kids. Kiddle Encyclopedia.